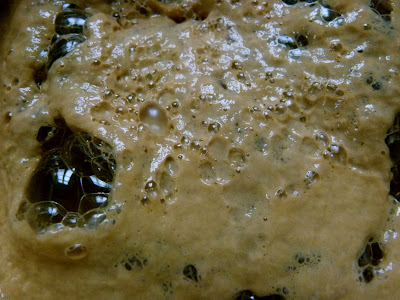 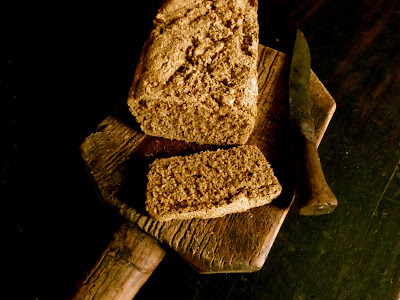 Apart from my own mother, there are not many people I know who still make their own bread. Down here is the Bearn, I have to so as not to have to eat the tasteless baguette they call bread here. Its a little disgusting for my own personal taste as I expect bread to taste like bread or at least wheat. My mother has made a loaf of Brown soda bread every day for as long as I can remember and must be the most nutritious breads in existence. When we were young in Ireland, two buttered slices and an apple always felt like a good supper.
This recipe is inspired by Darina Allens recipe at Ballymaloe house near my home in Ireland and suits my tempérament perfectly well. Its easy and quick to make, needing no kneading or bread-making machines, rises in one go and as far as work goes, it takes less than five minutes of your time.

Yeast
Remember yeast is a living organism and like many of us has a sweet tooth, likes to keep warm so its in your interest to be nice to it. A water température over 50° will kill it so keep your water just warm. Its possible to use, dried or fresh yeast but down here in the south-west, fresh yeast is in short supply so a good organic (non-OGM) packet version does the job.

Flour
I like to use a good rough, stone-ground wholemeal flour as I like both the texture and flavour but its possible to use finer flour.

Treacle or molasses
In Ireland they use treacle but here in the Bearn, a jar of dark molasses does the trick. The taste is a little less sweet but more bread like. Gives a slight caramel taste.

NB. Ingrédients and equipment should be at room temperature before using.

In a small warm bowl, mix the molasses with half the warm water and yeast. Leave to sit for 5 minutes in a warm place or until the yeast begins to work and develops a creamy, frothy surface..
Mix the flour with the salt in a warmed mixing bowl.
Make a well in the middle and pour in the yeast mixture with the remaining warm water. The mixture should be too moist to knead !
Turn the mixture into a warmed, buttered tin. Sprinkle a few sésame seeds on the surface if you like. Cover the tin with a tea towel (which prevents a skin from forming) and leave the bread to rise which will take 10-20 minutes depending on the kitchen température.

When the dough reaches the top of the tin, remove the tea towel and pop the tins in the oven. The bread will rise a little more in the oven.

Cook for 20 minutes. Redude the oven température to 200°C/400°F/6 and cook for a further 40 minutes until the bread is nicely browned and sounds hollow when tapped.

You can remove the tins from the bread 10 before the end of cooking and put them back in to oven to crisp. If you like a softer crust, there is no need to this.
Posted by Unknown at 10:39