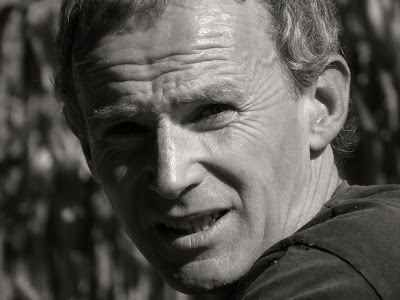 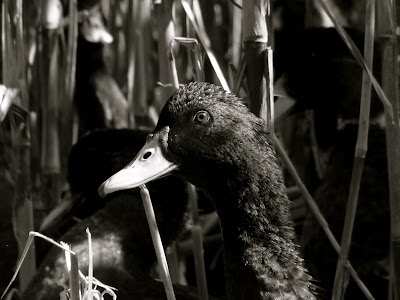 Introduction to the best duck confit producer in the region or in the world for that matter. His name is Jean-Michel Berho and he and his wife Christine have installed their farm and farm shop in Domezain, in the Basque country, less than 10km from our home. Jean Michel is one of those crazy inventor type people who, if he was not raising ducks, would be sitting in some isolated room under a stairwell, inventing machines to heat up a bottle of milk without the use of electricity or something in that vein.
As a fat duck farmer, which is the literal translation of what he does, has invented a system for his ducks that lets him feed their livers until the foie is gras without the cruelty involved. The duck is not forced to feed because at any stage of the feeding process he can pull away as he is not held in place. The duck still continues to feed from sheer gluttony and the result is a purely delicious, nutty flavoured, foie gras that is almost digestable. His farm is one of the rare farms where they still raise the Kriazera or basque duck which is renowned for the quality of its meat and the tastiness of its livers but of course is not so common anymore as the bird takes far longer to grow to an adult and is therefore too expensive to feed.
The ducks are raised, from a very young age, in an apple orchard and fields of 10 hectares replete with duck pond and river and apart from the brief period of gavage in the final stage of their lives, are constantly in the fresh air. From where I stand in the heat of the summer months, looking down from the farmhouse to the apple trees, they look pretty happy and healthy and unlike like the duck farms that are springing up everywhere around the south west of France to satiate the chinese appetite for french foie gras.
The corn used for feeding the ducks is certainly not any banal GMO variety but his own selected, ancient corn variety which is naturally high in protein but low in fat. His crop is organic without having the organic label as he likes to remain free to grow his crops and feed his animals without text book ideas, rather like the mad professor under the stairwell I suppose but with a lot of humanity and awareness of goodness and taste.

Online shop on EYHARTZEA
His magret or filet of duck (sous vide) is marvellous as well as his confit and foie gras which I prefer mi-cuit…..
Posted by Unknown at 16:09