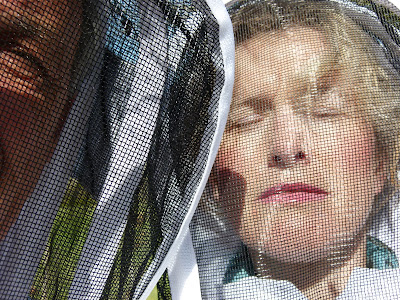 First day of the pollen harvest.
We have 45 hives of iberian black honeybees which spend their year between our garden and forest and the pyrenean mountain heather. We are not the smartest of apiculturists so we are lucky to have the help of Angela who comes over once a week to check their progress and treat them with essential oils when they pass by a low point. In our first year, we lost everything to the varroa mite or some other murderous creature which killed off our 10 hives practically overnight. I remember waking one early spring morning and finding a thick layer of bee corpses floating on the surface of the swimming pool. Nobody could ever explain to me what exactly happened to them and why. Next year, Angela came to the rescue and we began all over again with 40 hives, new swarms and a little more knowledge.
That first winter, the hives were spending the colder months in the heather canopy of the Landes , when hurricane Klaus struck and destroyed more than half of the population. This time it was clear that falling pine trees were responsible but it was another huge setback. 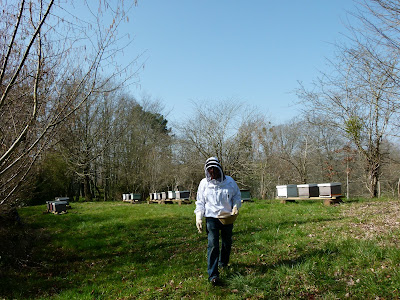 The next spring arrived and I remember it didn't stop raining from the end of February till the first days of July and the poor blighters couldn't leave home to forage for food and had to be fed cane sugar just to keep them alive. Their next few summer months were spent, gathering enough nectar to be able to last the winter which meant another year of no harvest for Jean Francois and Carol.
In 2010, we had one or two deadly storms and few attacks from asian hornets but some honey pots got filled.
After four months of winter rest, our beehives have returned from the coastal mountains and heather to restart a new year in the rich and flowery forest life of Mailhos.  2011 is looking good so far. The usual downpours of spring haven't hit us just yet so the bees can pollinate all my fruit trees and provide us with pollen.
Bee pollen is super rich in living ferments, vitamins and endocrine stimulants. It also contains a wide range of minerals and amino acids. It gives such a boost to your system just after eating. Apparently it just helps you to digest well but it feels like you're taking a strong dose of vitamin C or a crazy drug.
The first flowers of the year are the hazel followed by the male willow which is just finishing its bloom. The apricots, peaches, almond and pear blossoms are just behind with a whole lot of dandelion mixed in. All these flowers provide us and the hives with marvellous pollen for the moment and when the acacia and lime trees begin to bloom in May, the honey season starts.
This morning we both donned our shiny new bee outfits and went collecting.
Armed with my Pollen detective  colour guide, I'm about to discover whats in bloom right now. 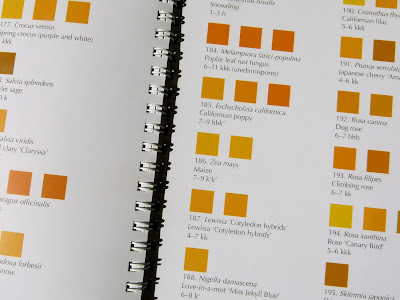 The predominant mustard-yellow colour is all dandelion.  The first plum trees have a darker, browner colour, like the almond trees. We've got a little lemony coloured plantain pellet or two. The Christmas rose is a little darker. The greeny-grey colour seems to be pear pollen and the darker orange could be crocus.
As the season progresses we start to see blue, purple, pink, dark green and even black pollen. The spanish bluebell has a pollen of eggshell blue that is as pretty as its flower. 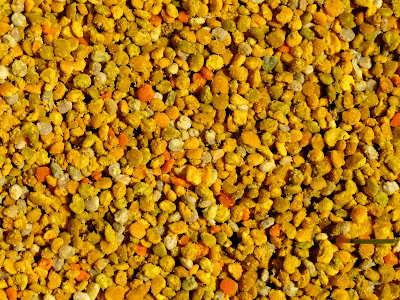 Isn't it amazing to think that one pellet of this pollen contains 2 million grains and each of those grains is capable of pollinating a tree or flower.
The only recipe necessary for this one is "eat it fresh"...  and in huge quantities.... 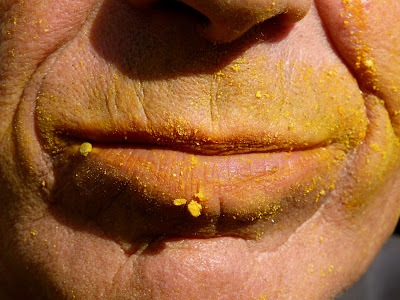