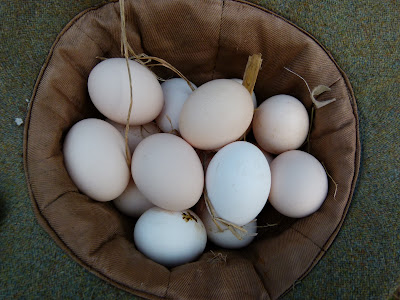 Introduction  to the gang of 16 – my egg layers and their two men.
Matron of the lot, Molly and her sisters, Rose and Aurore. 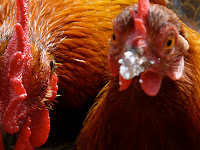 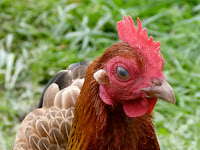 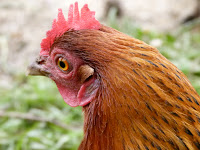 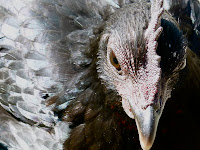 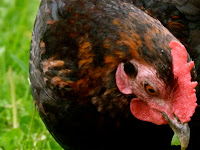 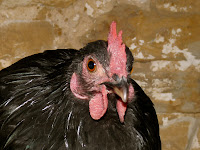 Our two wierdos, Cathy and Stringer. 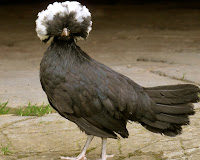 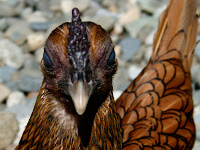 Fish the blind and thick, Sylvette the greedy and the superstar Puddle. 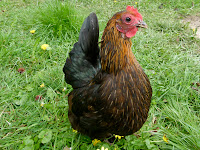 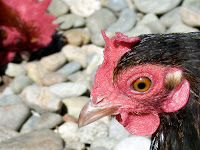 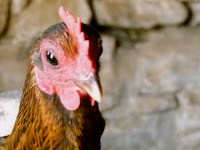 The two boys but not yet (or never to be) men, Blue and Yaya. 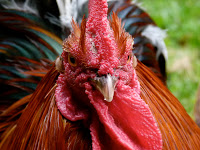 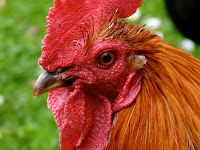 At lastly but not least important my little Honeybee. 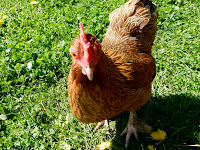 This fine family provides us both with over ten eggs a day. Small eggs but large yellow yolks and little whites which are firm and don’t spread all over the pan when fried. And they taste so good.
But why do people have problem with eggs.
When Honeybee eats 760 dandelion leaves, 300 nettle buds and a mixture of worms, coléoptères and snails every day, how can we talk about cholestérol. Her eggs are 100% Omega 3.  Its only when you feed chickens, corn that you find problems and the yolks are more corn syrup and coca cola than good for you and your heart. There is nothing better than collecting a warm egg from Under Honeybee’s tummy and eating it five minutes later. Its the ultimate gift !
As soon as we arrived in Mailhos, one of our first priorities were to keep hens. I was given two little chicks from a neighbour and both grew up to be two roosters called Jean Jacques and Stewy so I had to begin again and this time, Molly, Aurore, Aleitha and Rose joined us. During their first few months here, they slept nightly in the giant oleander growing in the courtyard until the fox came to join them one night and left with Jean Jacques and Aleitha. We had to build a chicken house which took time but in the meantime, we set up an electric fence all around the oleander to keep the fox out but of course kept the chickens up the tree for over one week. The chicken house was completed and since then the family has grown with a loss of a family member from time to time but not through our interference, as they are strictly here for their eggs and the fun they provide. 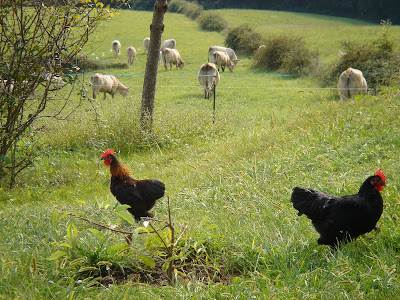 Every morning when I open the chicken house, 16 chickens come flying out over my head and go straight to their feed of dandelion, nettle, wheat, oats and feverole, drink some water and then go in search of worms. There chosen terrain is about 1 hectare or a little over 2 acres. They have their limits. They never stray into the fields or forest but also never into my vegetable garden as they know the consequences of such an act. The day is generally spent attacking snails, worms, butterflies and sometimes Spider the cat or the dead mice he leaves lying around. That is quite horrible but chickens are not vegetarian and dream of blood.  They are very naughty, sneaky, kind and more intelligent than one might think. Each one has a personality so distinct from the others.  Yaya is sweet and thoughtful to his girls, while Blue is a bully but keeps a good eye out for buzzards flying overhead. Molly is calm and generous with food while Rose is a bitch and pecks all those competing for food. Puddle struts around with her chest out acting as if she was Brigitte Bardot in Le Mepris and Honeybee is just perfect !


by the way, its very difficult to photograph chickens...

Boil two litres of water in a saucepan, then add the vinegar and a pinch of salt. Break the eggs one by one in a cup and slide them into the boiling water. Leave them for 3 minutes and remove and drain them and keep them warm on a clean tea towel.
Clean the leeks well and slice the white parts into 1cm slices. Boil them in salted water for 5 minutes. Drain and keep warm.
In a separate saucepan, add the wine, a small bit of the green part of the leek, the tomato paste, the finely chopped shallot and a pinch of sugar. Boil to reduce by half.
Mix the butter together with the flower by hand until you get a large ball. Divide into four and incorporate the butter ball by ball into the liquid, whisking all the time. Taste the sauce and season.
Rub the garlic clove into the hot toasted bread.
Divide the cooked leaks between the four slices of toast. Place two poached eggs on top of the leeks and cover with a generous amount of the warm wine sauce. Sprinkle some parsley on top.... 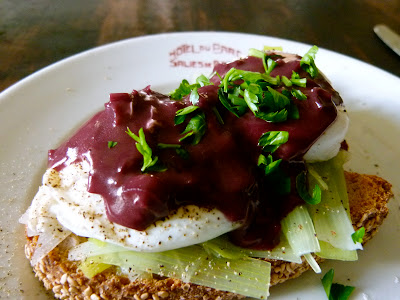