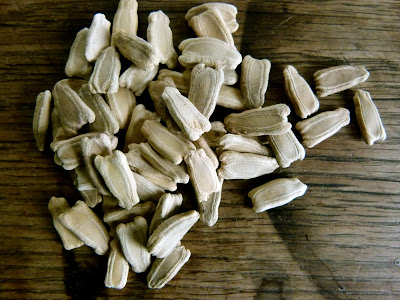 Seeds, of course, are the basis of everything that happens here in Mailhos. Without seeds we wouldn't have our vegetables, fruits, birds, wildflowers, grasses and of course, our chickens (what would they eat without my seeds that they steal?).
Since late february I've been sowing slow risers in my little lean-to greenhouse so that they are robust and strong enough when planted out in May.
Aubergines are always the first as they tend to have a hard time waking up from their seed stage. It takes nearly three weeks for the seeds to germinate and thats only when the temperature hits 20°. I've sown 12 plants of Listada de Gandia and Violette di Firenze which are lovely thin skinned varieties which are for some strange reason the only ones I can digest. I have a problem normally with aubergines.
Peppers and chillies are easier for me so therefore I tend to go a little crazy on their production.
I have sown 3 plants of 15 different varieties in late february and just like the aubergines, I am still waiting for the whole lot to pop out of their seed cases. 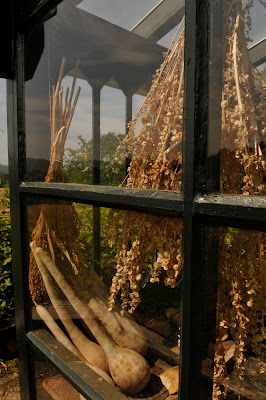 Mid march is when its all really starts though. Tomatoes needs to be sown so the plants are sturdy enough for the soil in late May. Flowers of all kinds are sown, along with rocket, lettuce, basil, parsley, celery, celeriac, beetroot, rue, basella, cabbage, leeks, onion, coriander, chervil, fennel, sorrel dill.... my list is endless and before I even begin thinking about tomatoes, I realise my greenhouse is already just about full. 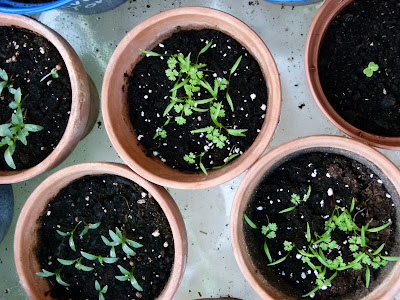 Most of my seeds are kept from the year before (except melons and squash which have a tendency to cross-pollinate in my garden and produce odd and tasteless fruit the following year). This year I think I have 46 varieties of tomatoes to choose from and knowing me I'll sow them all. Whether I plant them out is a a question I will ask myself when I assess the space available. I still buy new seeds though because I love something new. I love to not know whats going to happen when the flower dies down and the fruit appears. I love the mystery of not knowing whats going to end up on my plate.
In France we are blessed with so many small, wonderful and brave seed companies who sell the most wild, wonderful, local and exotic and rare varieties of seeds. I can find anything I want and they are all organically produced, healthy and productive and most importantly I can harvest the seeds myself.
These days its a lot more difficult to find seeds that are not hybridised and once they produce a decent enough fruit or vegetable in one season are dead to existence. The grains are sterile.
Thats ok for me down here as I'm a sucker for any new discovery. If the Ferme de Ste Marthe write to me in November and tell me they have a Japanese Gouma plant for sale, a Peruvian Oca tuber available or even a seed from an Egyptien White Courgette, I'm the first in with my order. Every year I add varieties and every year I take away a few (but never enough).
Sometimes its just because they don't taste as good as I want them, sometimes because they aren't hardy enough and sometimes because they are just ugly.
The industrialisation of our agriculture has caused a huge erosion of our seed varieties. Agrobiodiversity is declining at an alarming rate because farmers have to rely more and more on purchased seeds and the dynamic process that produces and conserves biodiversity  has been suddenly interrupted. European seed marketing regulations have also contributed to this decline by imposing criteria for commercialisation of seed varieties that are rarely met by locally adapted varieties.


The farmers, just like us "amateurs", are told that such and such a tomato has great yields and doesn't catch any mildew and who care if it tastes like pee pee and the plant is sterile and the seeds have to be bought every year and in the end the local variety fall into disuse and most importantly the knowledge of the farmer who sowed the seed. 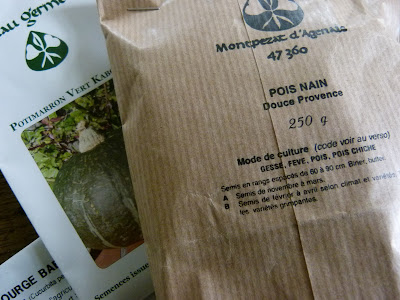 Kokopelli, La Ferme de Ste Marthe, Biau Germe and Germinance (among many others) are all doing the opposite, sharing seeds and helping to subvert the power of the domination of the seed industry by the large seed companies. Here in the Bearn, everybody swaps their seeds, exchanges plants or just gives away what they don't need. We seed swappers now refer to the seed varieties that are not admitted in the official lists (which lists the varieties that can be sold) as "Outlaws".  I myself exchange my "Outlaws" for soap from Leanne over the valley.
Happy St Patricks day by the way! 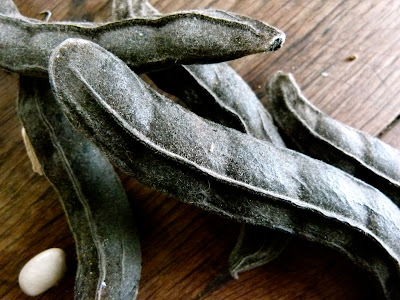