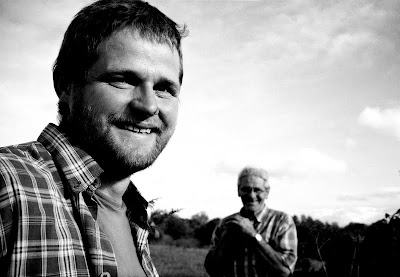 Enaut Harispuru and his papa come every June or early July, at the latest, to cut the hay.
We've spent the past few days checking the fields together, walking to and fro over our hilly terrain, making sure that no fawns have been left nesting and hidden by their mothers or the hen harrier couple have finished hatching their eggs near the boggy terrain to the east. Its lots of good exercise and important because once Enaut arrives nothing is safe from his big machine. 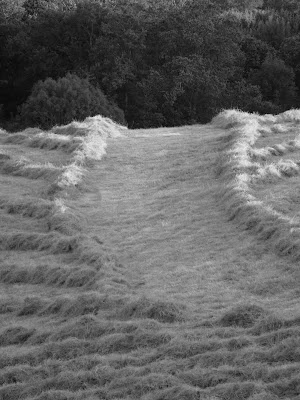 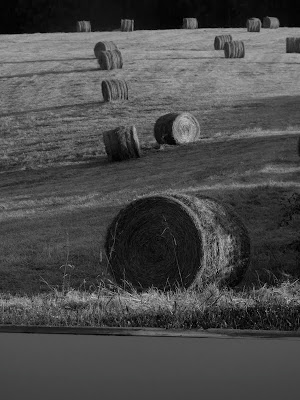 The buzzards, kites and carrion crows will be content at last with the open fields exposing their prey and will leave my chickens in peace (Molly was taken by a hen harrier a few weeks ago) and my young vegetables to grow strong. 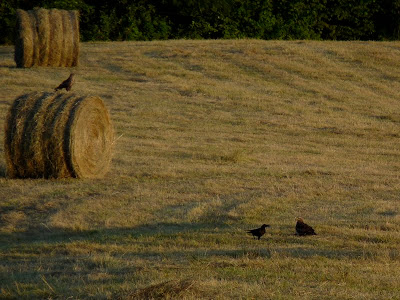 Once the hay is cut, the grass will grow back just enough to have a good forage in September for, maybe, 10 pregnant Blonde d'Aquitaine future mamma cows who Enaut will transport here for autumn feeding and to give birth in a zennish Mailhos atmosphere. 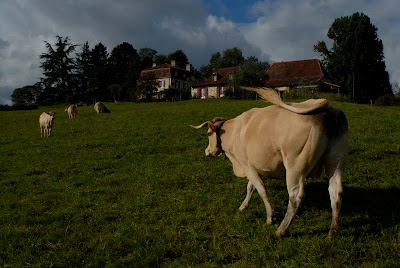 Last year, one of these fine young ladies gave birth in a very cavernous part of the farmland, all alone. I was calmly reading my book by the pool when she approached the fence, mooing noisily. At first I thought she was just a little daft and waved to her condescendingly and then realised it was a serious matter and moved towards her. Once she saw that she had caught my attention, she led me to a desolate little spot, near  a brook where the soil tends to collapse in on itself due to the many underground water sources branching together. I looked around as she mooed impatiently and saw nothing out of the ordinary  but in one spot I noticed thousands of flies gathering. Coming closer, I caught sight of the back legs of a calf jutting out of a deep hole and saw they were moving. The poor baby had fallen  head first into a water hole and was either drowning or had broken bones. Mother cow continued her sad sobs, while I ran hollering to the house calling for Jean Francois and a rope. Jean Francois's initial reaction to his name being called out, is to shut the windows and ignore me so after his little theatre piece of disregarding his wife, he came equipped with rope and a few more muscles than I.
Mummy cow was very pleased to see us both arriving and after tying a rope around her baby and dragging him to safety, she completely ignored us and licked the calf clean while turning on us her evil eye to say 'your work is done, now move on". Baby was shaken but fine and I felt proud of my veterinary abilities and mother cow proved her wisdom when faced with danger.
Enaut repays us for the hay, in friendship, good beef, some easter lamb and a good basque party with his family every September on the family farm in Ibarolle. The best of deals! 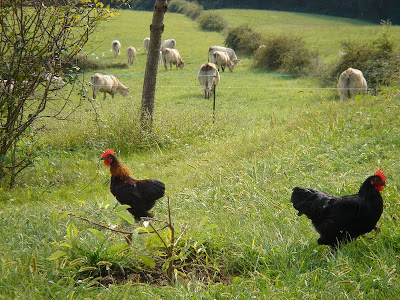 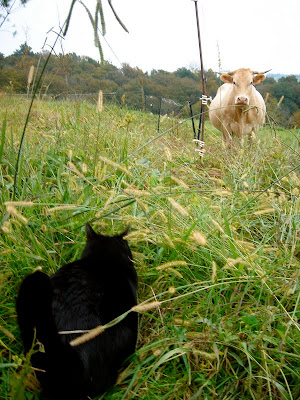