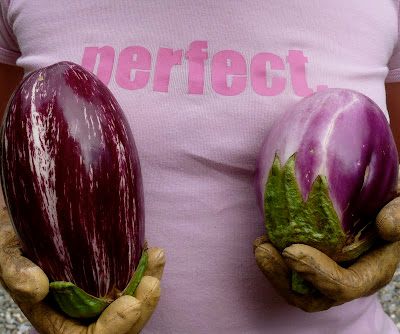 An aubergine for me is vegetable meat!
I have started a love affair with aubergines since I started growing them myself. The discovery of italian thin skinned varieties saved me from sticking the aubergine into the rubbish bin of disappointing taste. An uncooked aubergine tastes like a fleecy-floury apple with a flesh that disintegrates into a slimy, soggy mush when cooked badly and a leathery skin with little to offer on the perfume stake. Its neither crunchy nor crispy but once roasted it bleeds tantalising perfumes and flavours and the flesh becomes a majestic caviar.
Harvesting the Bianca Rontonda Sfumata di Rosa, Violette de Firenze and Listada di Gandhia, three thin-skinned Italian varieties is the highlight of the gardening season. 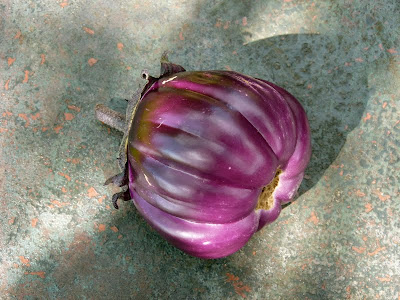 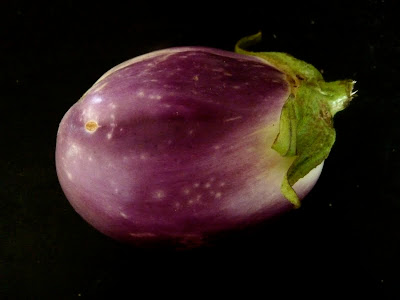 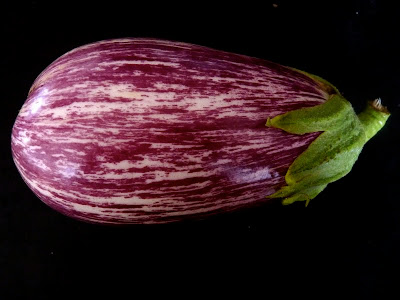 You need to have a hot, long summer and good, hummus-rich soil and weekly wettings of nettle and comfrey tea to get an aubergine to flower and fruit. My only worry with them this year is that a family of field mice have decided to make a mouse motorway through the roots of three of my best and most beautiful plants. The plants have started looking a little worse for wear since Jean Francois failed in his attempts to trap them with his new swiss-designed SUPER CAT underground mouse-trap but his idea to leave garlic cloves in the tunnels just might work. In any case ten other plants are growing wonderfully while looking very handsome.
Botanically speaking its a fruit (have you ever eaten an aubergine dessert?) but it seems to deserve the vegetable classification more than corn, beans or tomatoes. Like the tomato and potato, the leaves of the aubergine are horribly poisonous and the fruits contain a reasonable amount of nicotine but not enough to give a high. 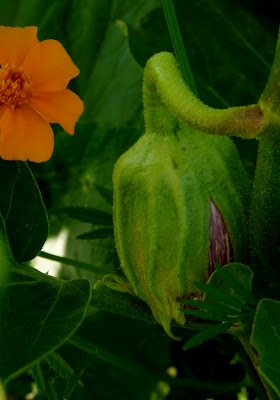 Nice to know it known as the Brown Jolly in the west indies ; a corruption of the indian/persian word Brinjal where its origins lie.
After travelling from its homeland in India to Persia and onto the middle east where the arabs, turkish and the lebanese really made the best dishes from it; mouttabal (burnt aubergine with tahini), baba ganoush (aubergine caviar) and iman bayaldi (stuffed aubergine). The romans hated the fruit and called it the apple of insanity so it was left to the moors to bring it to Spain and from there it made it to Sicily and mainland southern Italy in the 14th century to give us Melanzane Parmigiana (layered tomato and aubergine gratin).
Most cookbooks advise salting the aubergines which is not that necessary with the cultivated and less bitter varieties grown today but it does break down the flesh a little and stops the fruit sponging up fearsome quantities of olive oil in the cooking.
I love them best cooked simply like most of my fresh vegetables; roasted with a brush of olive oil and topped with the sweetest of orange orange flavoured tomatoes, a pinch of grated parmesan and fresh basil...

4 people as a starter

Preheat oven to 200°/6
Place the aubergines on kitchen paper and sprinkle with sea salt. Leave for 15 minutes, rinse well and pat dry.
Chop the tomatoes into small pieces and put them in a bowl with the parmesan and basil and season well. Stir in 1tbs of olive oil.

Brush a baking tray with olive oil. Place the aubergines on the tray in a single layer. Brush well with olive oil and season. Bake for 20 minutes. Turn over and spoon over the tomato mixture. Return to the oven for 15 minutes and serve warm with fresh bread. 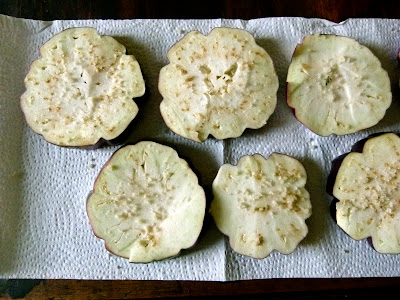 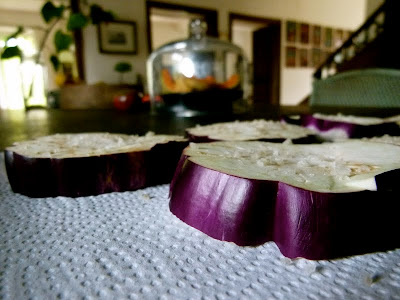 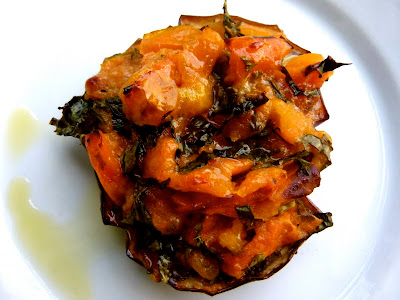