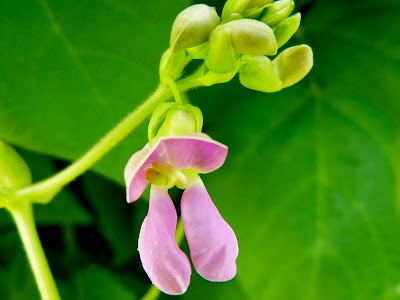 I usually call them green beans but my beans are not all green; the purple coloured Cosse Violette, the buttery-yellow Or de Rhin, the flat and green Chevrier Vert and the small and curly comma  Crochu d'Ete bean to be more precise.
Each variety is curling their way up the twine strings, attached as a wigwam to a central pole and held to the soil with tents pegs and holding well despite the southern winds that they have been hitting the garden over the past few days. The ivory, violette and creamy flowers shine intensely among their dark green leaves. 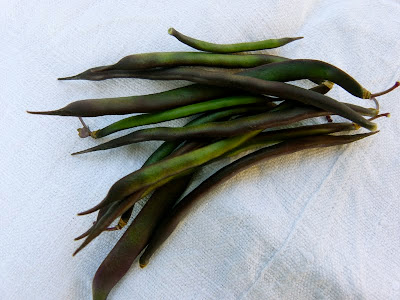 Some are in flower, others in bud but lots are ready to eat. I've grown four different varieties, four different colours this year. Two are dwarf and two climb to the sky and they all have been planted at different times so I'll have enough fresh beans to get me through the autumn months. 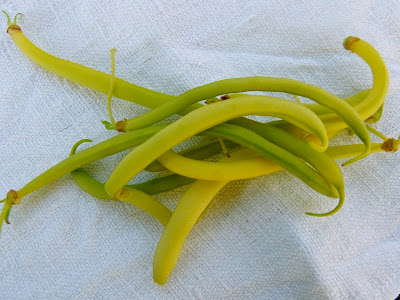 I can grow beans early here as they just need a soil warmer than 12°C to get them germinating. By May they are sending out their first climbing tentacles but don't produce flowers and beans until July when they go barmy. Surrounded by cucumber plants, who keep the soil mulched and moist and sometimes join forces on the wigwam so I can have a precious and fragile looking bean growing up the same string as a big showy Sikkim cucumber competing for space and light. 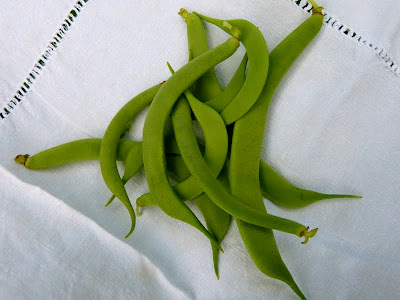 I love growing them because they are not only scrumptious and beautiful but also such fun to search for the dangling pods among the flowers and leaves. Pick them when young and not too formed and follow the advice of my mother in-law, Madame Simone Gaillard and add a pinch of bicarbonate of soda to the cooking water to keep the pods a vivid green.
I had a problem with green beans in my first years in France as my earliest memories of eating them were boiled to smithereens in a cocotte minute and served on a plate in tatters, over-salted to compensate for the lack of matter remaining.
Even though a bean needs to be cooked, there is so much to be said for a plate of freshly picked, lightly steamed butter-yellow beans tossed and glistening with melted butter, sea salt and freshly ground pepper. The perfect bean should have some bite to it but if its fresh will not need more than three minutes cooking. The purple varieties turn green once cooked so they just resemble the rest on the plate but impress in the garden.
For green beans I think of butter, roast garlic and onions, tarragon and chervil served with grilled fish, meat and very little imagination....

Preheat the over to 220°/7. Leaving the skins intact, wrap the onions in foil and bake in the oven for one hours until soft.
Make the french dressing by whisking the mustard, vinegar and olive oil together in a bowl. Season and add the garlic.
When the onions are ready, unwrap them and peel off the skin. While still warm, cut them in quarters and separate their layers and add them to the dressing.
Bring a pan of salted water to the boil. Add the beans with a pinch of bicarbonate of soda and cook for 3 minutes. When ready, drain in a colander and when still warm toss with the onions in  the dressing and sprinkle with the tarragon. 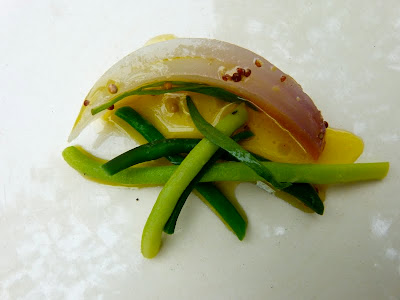