I do realise its late in the season to be introducing my tomatoes but I've been too busy tasting them to even begin a conversation on their subject.  As they are the highlight of my gardening year, I needed to see every variety flower and fruit so I could taste and judge before reporting. So here I am in September after another bizarre season. Like all farmers I have noticed that nature is not kind and nature is not perfect and no season is as you would wish whether there's a glut of rain, a hail or stones or glare too much of sun so instead of complaining I will just say that the summer was strange. 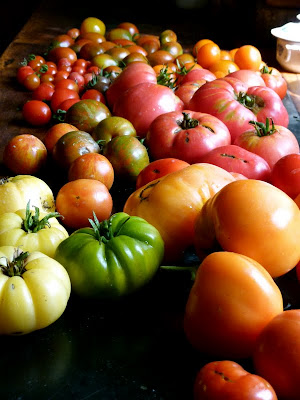 I've already mentioned the July mildew attack which left me with 12 plants and varieties less than before but with minimal care and comfrey tea, I managed to get the remaining plants to bear fruit and forget about their pains. For weeks now I been potting and sun drying and aga drying and sauce making and sprinkling salt and pouring olive oil and relishing sweetness and acidity, firmness and juice. As with all my years tending this garden, these moments are just the most rewarding. I cannot help asking myself how a simple soil and sun can produce such magical range of diversity from one single fruit variety. 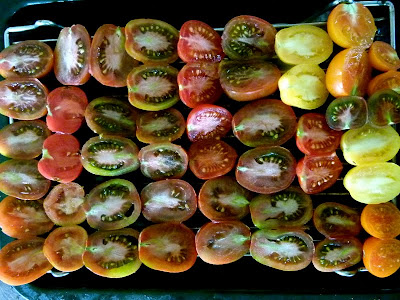 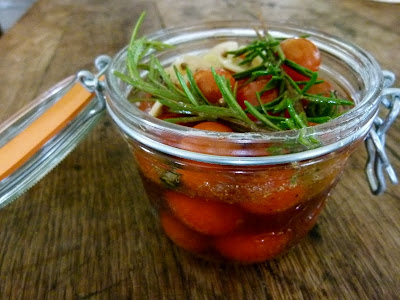 My Bearnaise friend Cathy went off on a weekend to Futuroscope in July and came back to 25 black rotten stalks. Marcel, the neighbour, woke one morning to find his prized tomatoes brown and stinking - I haven't done a local poll, but Bruno, our hay guy thinks I might be one of the few fortunate fellows around still harvesting the pomodoro this late in the season. If this is true, then its only due to vigilance and LUCK! 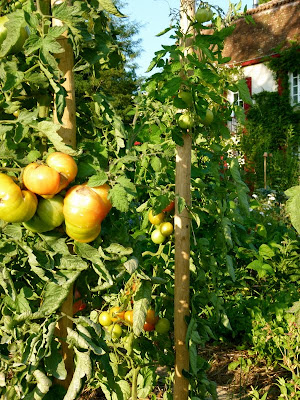 They were all seeded out in the greenhouse in late march, germinating 14 days later and shooting up into solid, healthy plants until they were all planted out in late May. Each plant root was laid at a 45° angle in a compost rich soil hole lined with nettle leaves and mulched with comfrey leaves. Left to themselves, as the evenings warmed, they grew steadily up their copper treated wooden poles until unwatered and uncosseted they either died or bloomed.  A pampered, spoilt tomato will taste like a sponge soaked in pink juice. The less watering you do the deeper the roots will go in search of moisture and in the meantime will pick up its true taste through the minerals and enzymes in the soil. 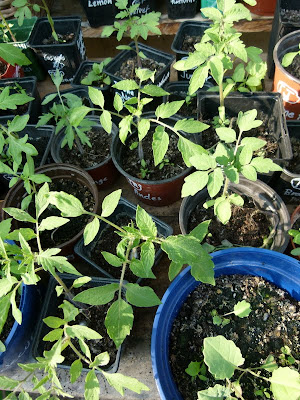 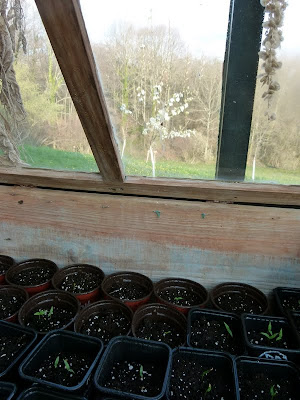 Rich in vitamins and minerals, and (when cooked) the antioxidant Lycopene, that can battle any heart attack, cholesterol and cancer so they should be required eating for just about everybody when they're in season, are fresh and are not soaked in pesticides.
A tomato picked straight from the vine  smells like nothing else. Squashed whole onto a thick slice of fresh campagne bread, drizzled with olive oil and sprinkled with sea salt is my idea of heaven... The taste is marvellous yet different whether its ripe, raw, roasted, stewed or green.
It would be impossible or perhaps just boring to describe each and every one of the 48 plants left standing after the july mildew attack so I'll just show my pet favourites... 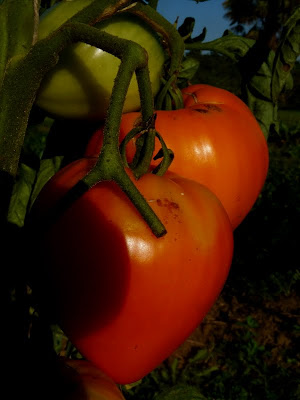 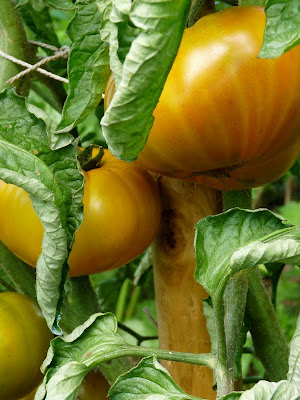 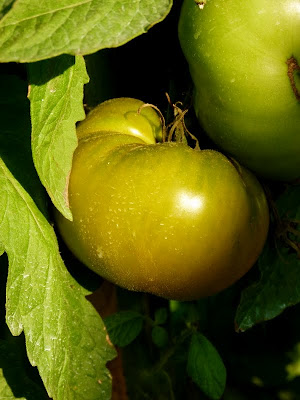 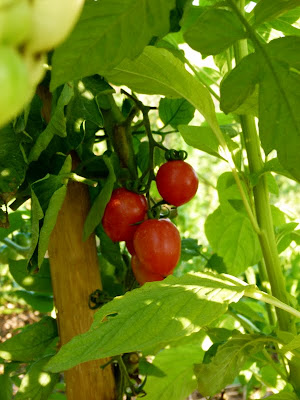 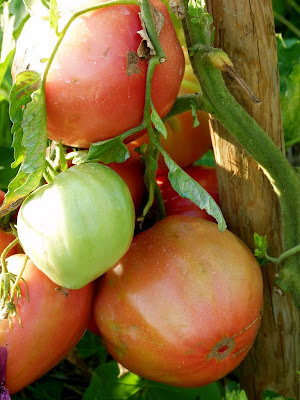 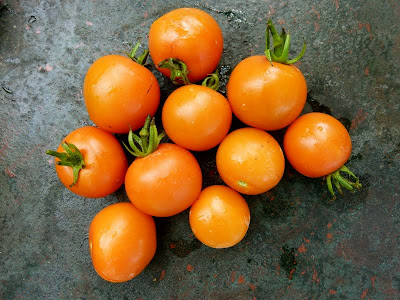 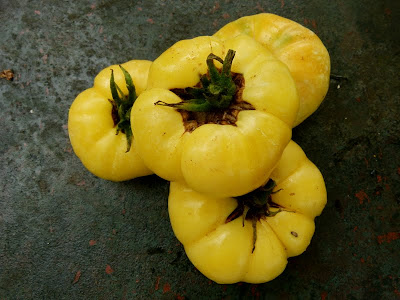 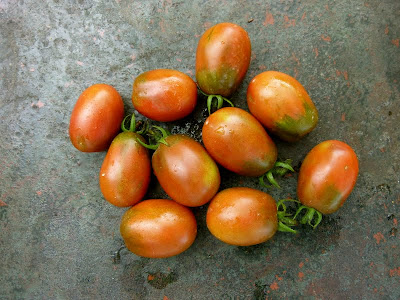 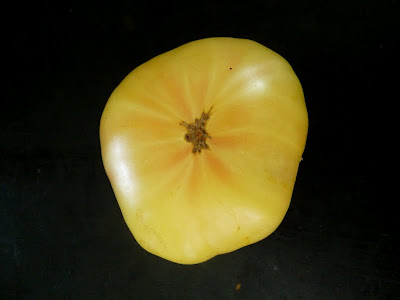 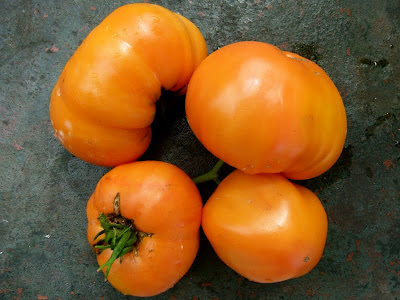 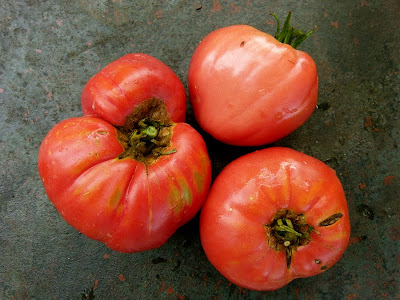 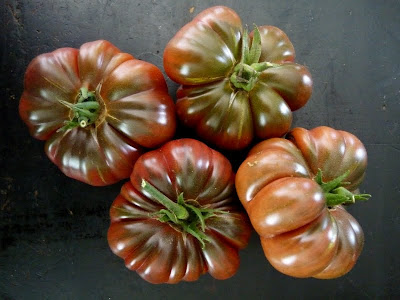 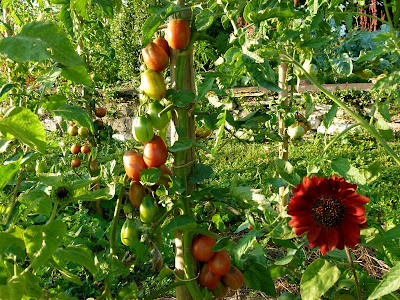 Grill the peppers whole until slightly blackened all over. Cover with a cloth and leave to cool. Remove the blackened skin and scrape out all the seeds and fibres. Cut into quarters.
Cut the tomatoes in half and squeeze the juice into a sieve over a bowl. Discard the seeds.
Cut the chillies in half lengthways and take out the seeds before chopping finely.
Add the grated garlic, the vinegar, 4tbs of olive oil and chilli to the tomato juice. Season the tomato halves.
Put the bread into a large bowl and pour over the tomato juice. Soak the bread until all the liquid has disappeared.
In a large dish arrange a layer of bread pieces. Scatter over a few tomatoes, some peppers, capers, anchovies and basil. Drizzle with olive oil and arrange a second layer. Let the tastes infuse and serve.... with even more olive oil.
Four different views of Panzanella by (in order of appearance); Jean François, Ivan, Claire and Yveline. 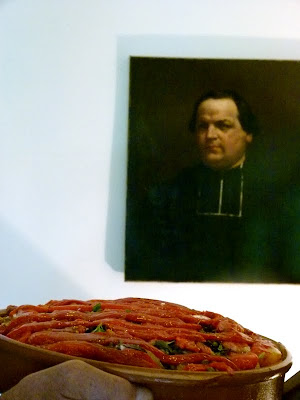 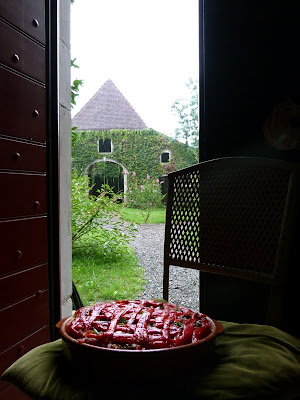 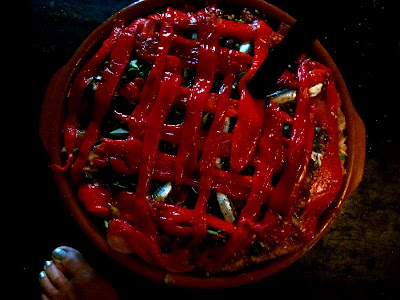 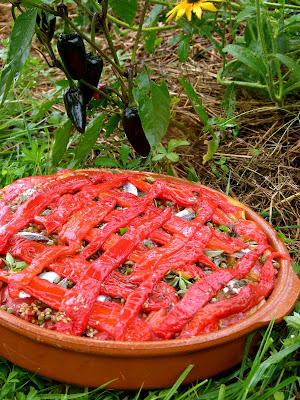