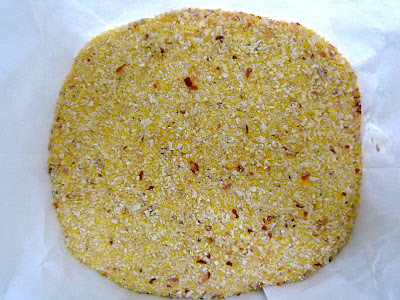 Its corn harvest time and Jon Harlouxet has invited us all to help him collect, by hand, the cobs of Grand Roux and eat plates of polenta and taloa together in the his home village of Bussunarits. 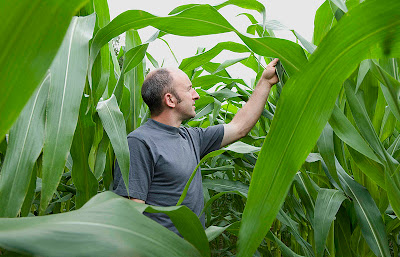 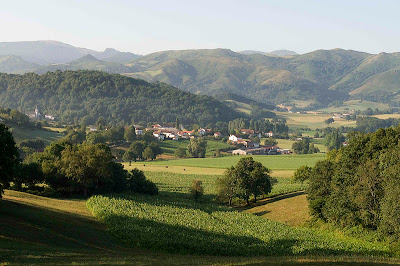 As I've mentioned previously, I have a few personal problems with corn!
Corn covers great swathes of land whether on the argentinian plains, the american mid-west, the ethiopian communal lands or the river banks of the Gave d'Oloron and what purpose does it serve but make animals fat and humans diabetic without much nourishment involved. Every summer I curse the corn fields for blocking my view on the river or the distant pyrenees. I curse the corn for needing so much fertiliser and irrigated river water and being so boring to contemplate. Wheat and barley sway in the wind, hinder no views, are rarely thirsty and can sustain us well.  So what is it with farmers these days that corn has become not only their infatuation but their crutch?
Since the 50's the human being, starting in the US, has being consuming this high sugar and carbohydrate rich grain and has little to show for it except peaking diabetes, obesity, sweetened refined food and dead soil. Europe and France are following their great example and starting to suffer from the same problems.
But Grand Roux is something else... one of the original corn varieties, brought to the basque country by the terrible conquistadors of the 15th century. As its name suggests, the seeds are red but sometimes orange and even the good, old normal yellow. Compared to the hybrid versions grown by our lazy farmers today, the Grand Roux and many other indigenous varieties, are rich in protein, minerals and vitamins while low in starch and sugars and can therefore nourish a living being. 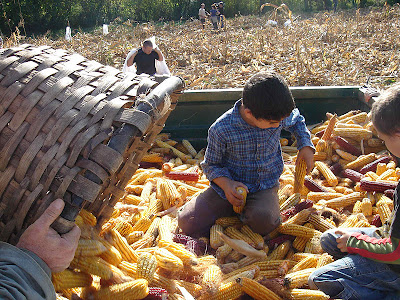 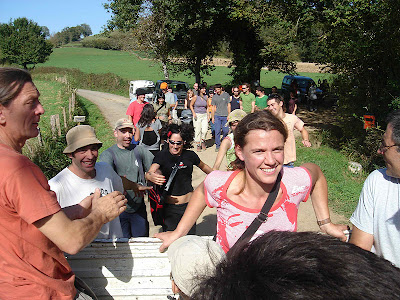 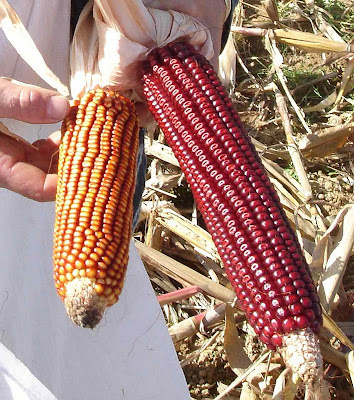 After the war, the Marshall Plan brought the big american seed companies and their hybrid varieties to europe and convinced the farmers that production was more important than quality and the farmers chose the corn that produced more with less to offer. The hybrid varieties were listed in the great book of recommended seeds in Paris's agricultural ministeries and the Grand Roux dissapeared into obscurity.
Until one day, a local farmer called Panxo was visiting some relations in Guipuzcoa in the southern Basque region and heard of a monk in a monastery in the mountains who grew a red corn that made a delicious bread. Curious Panxo went to visit and returned to his farm, up north, with a couple of cobs of this coloured fodder and the following spring sowed out the seed. The plants that grew were parsimonious with water, needed no pesticides nor chemical fertilisers and stood high, straight and strong and produced a seed that tasted good, firm and nutritious. Panxo, used that seed to plant two fields the following spring and the spring after that, he shared his secret and seed with the neighbours until 5 years later 46 farmers in the Basque Country and Bearn were growing it.
But the faceless ones began to hear rumours of the Grand Roux and mumbling was heard from the Monsanto's glassed-in, headquarters nearby in Peyrehorade, one of the grand megacorps of the Marshall Plan era, who had imposed their seeds way back in the 50's and 46 small 'red-corn' farmers were not going to destroy their big plan of world seed dominatiion by bringing taste and enjoyment back into the game so they ranted and raved and wrote articles in the local and national press about the dangers of the old ways and struck fear into the farmers hearts when they talked of the diseases and pests that would be let loose once the 'red corn' returned.
This game continues today as they fight, along with their cronies, to make sure traditional seeds are suppressed and kept off the official seed lists and never come back on the market to compete with their expensive, bland and mediocre commodity.
Today it is still illegal to buy and sell the seeds of the Grand Roux but Jon and Jean Francois have found a network of disobedient young chefs in Paris, like Pierre Jancou and Inaki Aizpitarte who fearlessly use the passport-less polenta and flour of the Grand Roux on their menus and will perhaps attract the wrath of the racketeering, taste-fearing mobs.....
Jean Francois and I also harvest our own Grand Roux and dry it out in our barn until the spring when its ground to flour and polenta at the small stone-grinding mill of St-Jean-le-Vieux. 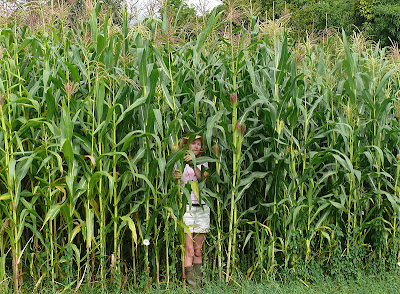 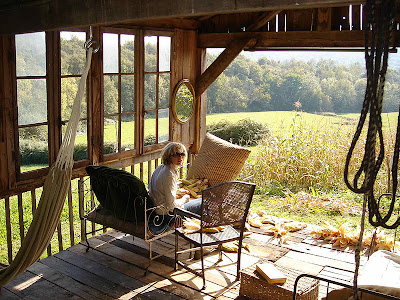 The polenta has an aroma of hazelnuts and is speckled, red and orange with a inimitable taste...

Slice the duck fillets across the fat in a criss-cross pattern without touching the flesh below. Sprinkle a thick bottomed saucepan with a teaspoon of sea salt and place over a moderate heat. Once hot, lay the fillets on the salt and reduce the heat. Cook slowly until most of the the fat melts and there is a thin layer resting. Pour away the fat (but keep for many other delicious dishes).  Keep the duck fillet in a warm place.
Remove the tough stalks and wash the cavolo nero leaves.
Bring the water to the boil in a large-thick bottomed saucepan and add a teaspoon of salt.
Pour in the polenta flour and a continuous stream, whisking all the time to prevent it lumping up until the mixture is blended and creamy. Reduce the heat and cook, stirring from time to time for 45 minutes. It is ready when the polenta falls away from the sides of the pan.
Bring a large pan of salted water to the boil and add the cavolo nero leaves and 6 cloves of garlic. Cook for 8 minutes or until the cavolo is tender. Drain, keeping the garlic and a little of the water to the side. Place two-thirds of the cavolo nero and garlic in a food processor with a little of the water and chop until a rough purée. Season well.
Heat the frying pan once again and fry the fillet on both sides until golden-brown.
Chop the remaining cavolo nero roughly with a knife. Heat the olive oil in another thick-bottomed frying pan. Add the sliced garlic, finely chopped chilli and fennel seeds and fry until soft. Add the roughly chopped cabbage and fry for 3 minutes. Season well and keep warm.
Slice the duck fillet thinly.
Mix the purée into the wet polenta along with the butter,  the cheese and season to taste.
Serve with a spoonful of the braised cavolo and duck fillet on top. 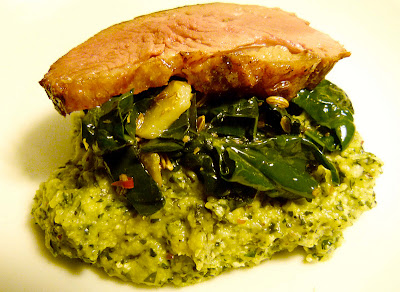