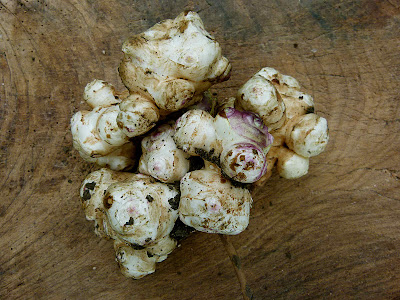 These knobbly tubers that look like potatoes but taste more like a radish crossed with a hazelnut and a handful of earth, are called Jerusalem artichokes, though they are neither originate from the middle east nor have any intimate relation to a globe artichoke.
As its tall, sun-coloured flowers tell us, this artichoke is actually just  a sunflower with knotty roots. 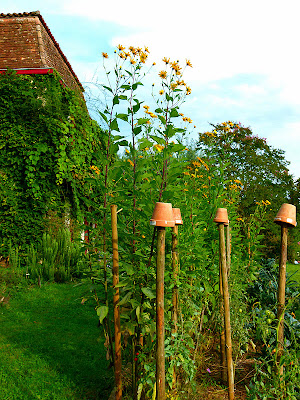 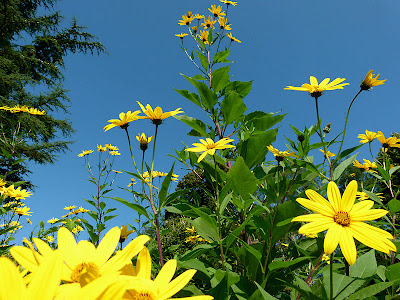 There is a good enough reason why you rarely find them on the local markets in France nor could you serve a local béarnais over the age of 60 a plate of these refined tubers for dinner. Their easy-growing, non-brainer, gardening status means that everyone grew them through the german occupation. The germans seized their potatoes and left them with turnips and jerusalem artichokes and to listen to the old folks talking, you'd think thats all they ate during the 5 years of war. Whatever the truth of the matter, for a béarnais, I grow and harvest pig food as thats all they're good for. 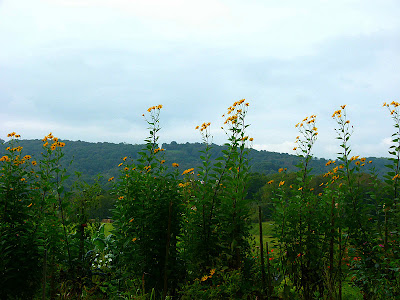 Three years ago, I ordered a large bag of "Fuseau" tubers from Biau Germe and planted them out in early march.


A Jerusalem Artichoke is the most little-imput, large-output vegetable in the garden. Not only are their flowers splendid but it almost feels like cheating to grow them, as once they are in the ground they develop no known diseases nor any great ennemies (apart from the slugs early on!).
The first year, with 1 kg of tubers planted, I harvested 50 kilograms. As one can imagine I had more than enough for us both but as a Jerusalem Artichoke is more of an american plant, I followed the harvesting advice of an american garden book (probably written by an northern, ice bound Inuit) and once the flowers had died back, removed the whole 50 kilos from the soil, washed them scrupulously by hand and stored them in wooden trays in the wine cellar. The following Saturday, I bumped into Dominique, my more learned friend, who runs an admirable garden at the local Château d’Orion, who laughed her head off and explained that in our climate a jerusalem artichoke stays in the ground for the whole winter, protected by the warmth of the soil. I went home and dug a big hole where the plants once were, and emtied three large trays back into the earth and covered them over.
I kept a few kilos, as a test case, in the fridge which whithered up and softened to mush in the following weeks but those under the earth managed to survive despite intermittant mice attacks until the following february.
The next year, I let the artichokes grow themselves, from the tuber bits remaining in the ground, just spacing them at 1 metre each when big enough but the harvest was more than pathetic and I barely had enough tubers to get me through to Christmas.
So this year I planted out newly bought tubers in sunny part of the garden which served as a valuable windbreak for my more fragile tomato plants. 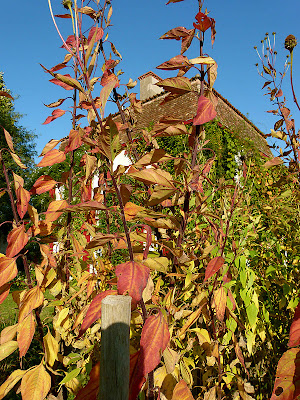 As I write the russet tall stalks sway in an unseasonal and unexpected southern, warm wind. The soil is loose and easy to dip into with your bare hands so the gradual harvesting of the chokes is almost a thrill. 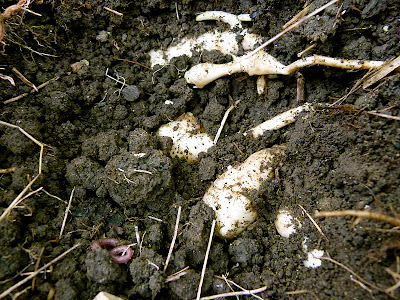 They will stay in place attached to their roots throughout the winter and as long as I keep them mulch free, they should survive hungry rodents.
Normally ready for harvest after the first frost, in the Bearn I can start eating tiny, thin skinned tubers from september onwards. Unlike potatoes, this is the period when they can be just scrubbed and eaten raw, shaved thinly on a mandoline and tossed with lemon juice and olive oil.
Once the skin thickens,  they need to be peeled roasted in butter or olive then served on a bed of fresh watercress with crisply bacon or tomatoes or crushed toasted hazlenuts or made into a velvety, cream soup.
Difficult to digest due to their starchy inulin, which can give rise to « wind» problems among the dinner guests,  they are still brimming with vitamins , fibres, minerals and goodness and a pinch of bicarbonate of soda in the cooking does the trick to calm all digestive difficulties... 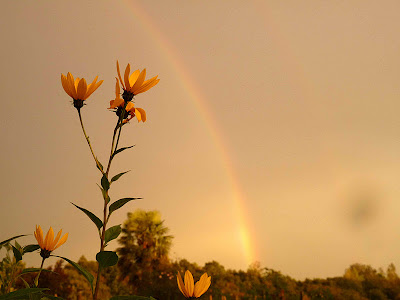 
Preheat the oven to 200°/6.
Scrub the artichokes under cold running water but don't peel them. Cut into even sizes and place in a baking tray. Drizzle over a little olive oil and season generously. Toss the artichokes in the oil and roast in the oven for 40 minutes or until golden and tender.
20 minutes before the artichokes are ready, place the tomatoes on a separate roasting tin. Season and spoon over the vinegar and a little olive oil. Toss to coat. Roast for 20 minutes until the tomatoes are soft.
While the vegetables are cooking make the sauce. Crack open the walnuts to extract the nuts. Pound them gently and gradually in a mortar with a pestel. Add the anchovy and the garlic cloves and pound once more until creamy but roughly textured. Stir in the chilli, zest and juice of lemon and pepper. Gradually incorporate the olive oil.
Arrange the artichokes on the cress leaves and the tomatoes on top. Spoon over the walnut sauce and serve at once. 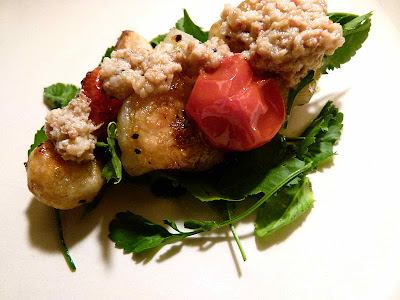