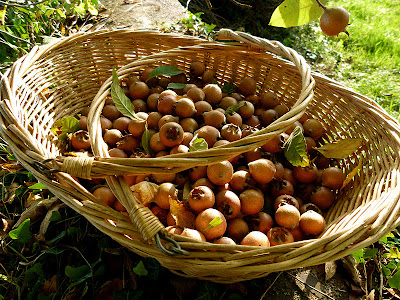 Mysterious Fruit N° 1
Because the weather has been so mild and bizarre, many of the exotic fruit and vegetables I've grown for years, have had the chance to ripen this year as the pre-frost season has been so drawn out. Its like Spring has arrived before a proper autumn has begun. Yesterday on one of our long cycling trips over the hills from Mailhos to Burgaronne and Sauveterre, we saw sweet-chestnut in bud, narcissus in bloom and wild arums sprouting. I have my February camelias in flower, fresh strawberries to eat and pear in blossom. Its a bit too spooky for my liking. Bring on winter and a good flash of cold to bring us back to reality. Napoleon needed  a cold winter to halt his takeover of Europe and Russia and the same can be said for the nasty asian hornets and spanish pine processionary caterpillars who are having a field day thinking there will be no great freeze this year to stop their march northward to destroy bee colonies and pine trees. 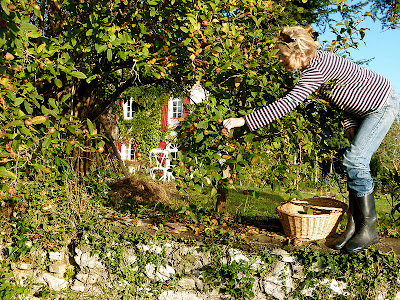 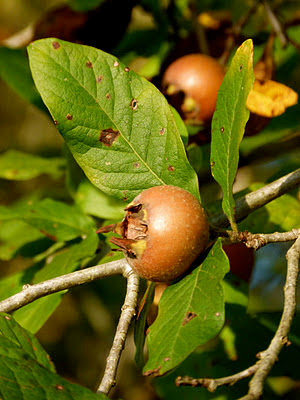 Medlar is not a real mysterious or exotic fruit. Its common to all european countries and grows wild in the forests and hedges in France but despite its banality, few people know, harvest or appreciate them. Before arriving here in Mailhos, I had never noticed the tree but because of its proximity to the house, the delicacy of its flowers and the popularity of its fruit with the local birds, I was curious to find out what it was and behold it was a tree that probably grows just as commonly in Ireland as here and I probably passed by one of them on my way to school every day.
The medlar wood is used to make the Makila or the elegant and unique walking sticks of the Basque people. I'm told that the stick was more a killing instrument, makilatu meaning to bludgeon in basque, than a support on long treks but the medlar tree is still cultivated in this part of the country especially for the production of these deadly weapons! 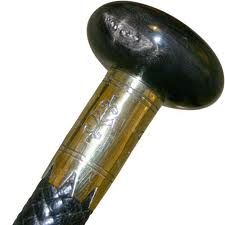 This ugly little fruit makes a delicious jelly and other sweet delicacies but before this is possible it needs to be bletted or rotted at home. It is harvested, usually after the first frost, before the birds gobble down every last one and brought inside. The word bletting was coined by Mr John Lindley in 1848 and is the process where cell walls are broken down, converting starch into sugar and decreasing the acids and tannins.  I think Jean Francois is the only human being that loves acids and tannins and can eat and appreciate the fruit when its hard like a marble. He calls it the "hairy arse" or the "cul poilu" in french, and  can gobble down a dozen or so a day without his stomach protesting...! 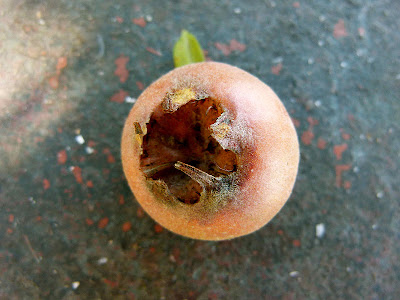 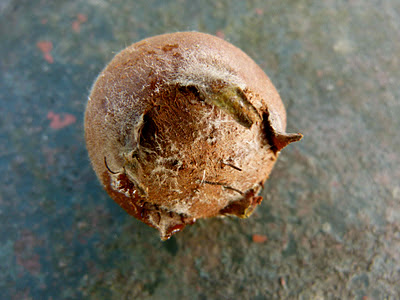 The medlar is bletted on a plate, "arse" side down until it turns dark brown, wrinkles up and is soft and mushy to the touch.
Once bletted and rotten they taste like sweet lemony custard and are delicious roasted and served with fresh cream or made into jelly, chutney or even cheese. Pull off the stalk end and squish out the fruit, taking care of the pips, mix its pulp with sugar, cream or just eat it plain. Once bletted they are impossible to transport as the flesh will burst  through its delicate papery skin with the slightest pressure so I can imagine this is the main reason why supermarkets don't stock them... 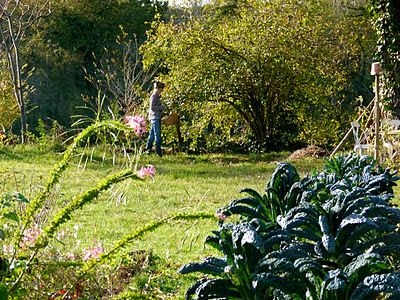 So the medlar remains a forgotten more than a 'mysterious' fruit but such a pity as the tree itself is so pretty with its twisted branches and large pinkish-white blooms crowned with dark leaves growing 6-7 meters tall. Ours has been here for so long and looks so happy, once we cleared the brambles that engulfed it, so it now feels the sun on its branches. I never feed it, prune or water it. Its a little gem in my garden of spoiled brats.

Preheat the oven to 200°/6
Heat the butter in a baking tray and coat the medlars in the melted butter. Scatter with the sugar and add the cinnamon stick to the tray.
Roast for 15 minutes until the skin has split and the fruit is soft.
Serve with cream or ice... 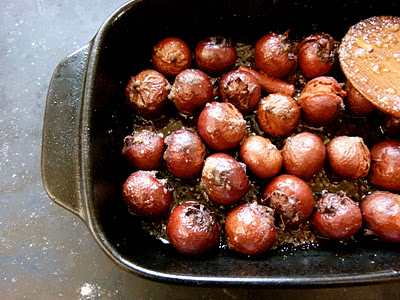