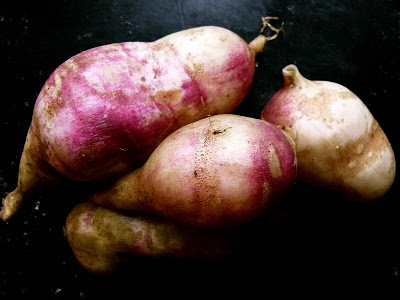 Mystery Vegetable N°1
At last I've got to taste the famous Yacon tubers that I ordered over the internet last February, kept alive in a closed, cold box in the wine cellar until May and then planted out in compost rich soil. I was convinced I had screwed-up somewhere as the plants took a good month before germinating but once they had established themselves, they grew over 2 metres high, were attacked by neither pest nor malady and filled out to such a width that they blocked my access to one side of the garden. They flowered from september onwards and its was only then that they started making their Yacons. 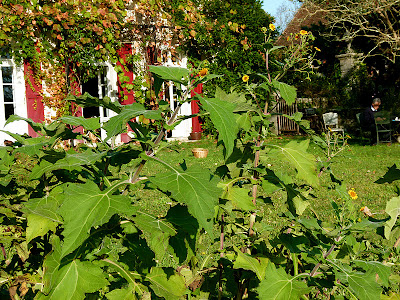 I had no idea what I was growing, except in French they call them Poire de Terre or ground pears, so I thought, as I had such a hard time growing them on my trees, I could try underground. Now, no matter what some french botanist has to say, I really do not think they taste of pears, more like a water chestnut-cum-apple-cum-watermelon. The texture is crunchy, almost crispy and juicy. The incas (who valued the Yacon) called it the "water root" as perhaps they used it as a thermos flask or juice bottle on long overland treks .
Like jerusalem artichokes, the Yacon shares the same family as sunflowers. The flowers are yellow, daisy-like and teeny and continue to flower despite the colder nights. 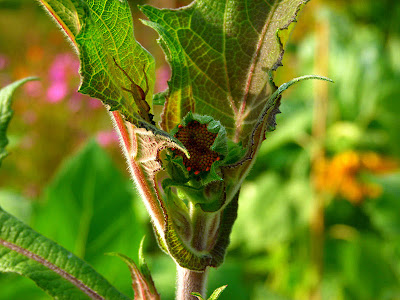 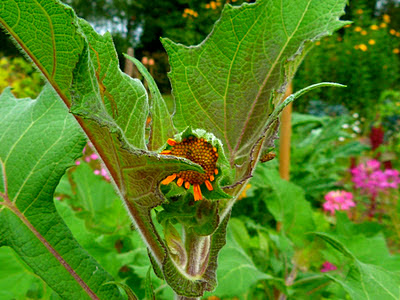 Most of my plants are still upright and green so my curiosity has forced me to bandicoot deep in the soil around the plant, stealing the odd root tuber or two - just to try! Like the jerusalem artichokes, the tubers are rich in that indigestible inulin sugar that is apparently fine for diabetics who take it in pill form and replace maple with its syrup and its without calories that surely makes it so popular in the US.
Once we have a frost and the leaves are withered by the cold, I'll harvest the whole lot.
Today, out of curiosity we pulled up one of 10 plants. We lifted the whole root out of the earth and harvested the bigger tubers for tonights dinner. 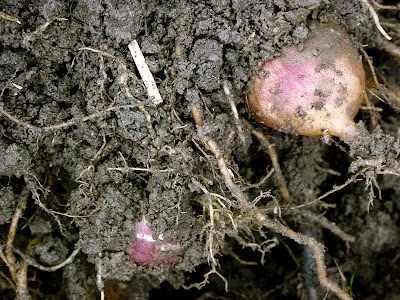 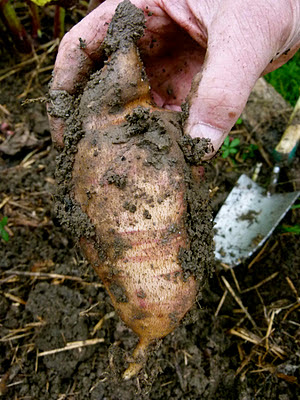 The smaller ones will be dried and stored away in damp peat to protect them from a potentially cold winter and serve as next years seeds.
My tubers are blushing pink with the tenderest of skins, weighing up to a kilo each. They taste delicious raw but apparently sweeten when left a day or two in the sun or as they are stored over winter.
I treat them as I would a winter radish, sliced paper-thinly on a mandoline and served as a snack. Tossed in lemon juice (to prevent them browning ) and added to a salad either grated or sliced or diced or julienned or just eaten as a pear or apple in the garden as I work. 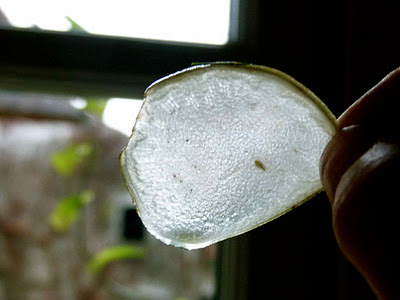 I wouldn't dare cook them. They just look too fragile and would probably collapse if any heat was applied but right now when raw food is becoming rare in the garden, its a pleasure to have a yacon around...

Whisk the garlic, lemon and olive oil together and then add the dried blueberries.  Leave to soak for 10 minutes until they soften. Season well.
Slice the Yacon super-thinly on a mandoline (without cutting your finger off like I've just done). Pour over the dressing and sprinkle some roughly chopped fennel leaves. 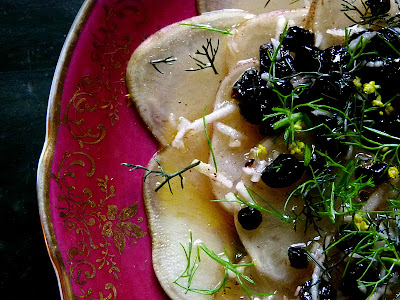