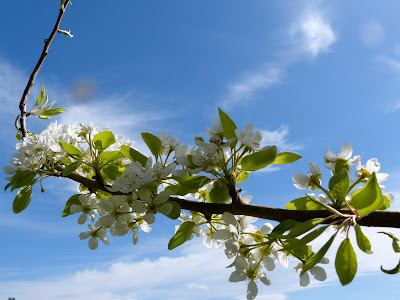 We left for Paris in a sleety, cold and winterish rain to collect our furniture, books and the rest of our lives that we hid away many months ago, leaving behind my just germinated baby plants in the best of care in a sun-heated greenhouse. Within two days, horror struck and I received a text message from "the best of care" in Mailhos to say that temperatures had jumped to 33° on the Sunday and in the greenhouse every young green stalk was baked to a brown crisp. 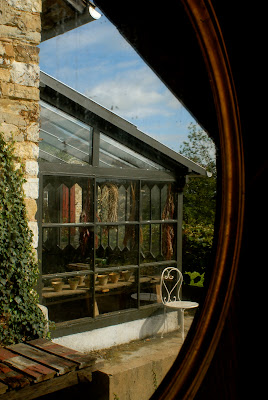 We returned with 178 boxes of books and four truckloads of near to useless furniture which sits in the barn hoping for a home while I had hours of work ahead to rebuild the stockpile of aubergines, peppers and tomatoes. That done, I opened some boxes and my books made me feel a little more at home but the big work remained in the garden.
After the months of winter/spring rain that have inundated Bearn, temperatures suddenly leaped and Mailhos became a jungle. In the one week we were away, nearly every flower and fruit tree bloomed; every plant grew crazily including grass, vetch, rye and oats in my vegetable garden. I missed the peonies flowering and just made it home to see the cherries in all their beauty while the pear, plum and apple were already beginning to form fruit.
But lets go back to that mixture of grass, vetch, oats and rye. It stands thickly at a height of half a metre and on Thursday last, we both knelt down to tackle a bed of two metres by two by hand and spent two days  clearing it. Calculating the size of the garden and my ambitions for 2013, at such a rate, the garden could be cleared by early December - just in time for the first frosts....
So we decided to make Lasagne....

Recipe -
You take a very thickly overgrown patch of impossible, green growth and you cut if down to toe level. 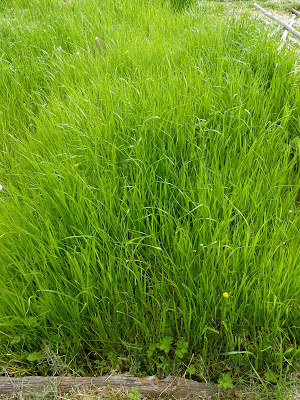 Gather up the grass and keep it to the side. Take lots of mover’s cardboard boxes that you have just emptied of books and remove all plastic tape. Lay these down over the cut grass making sure that each box overlaps the other so absolutely no light can find its way through. 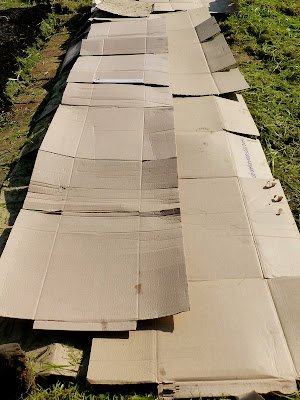 Water well to flatten the boxes. 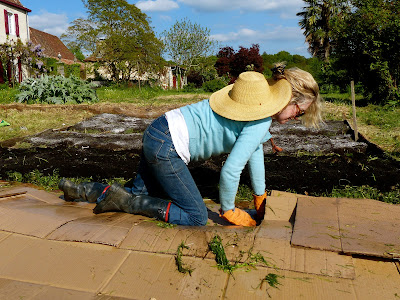 Scatter with a thick layer of grass cuttings until the cardboard is no longer visible. 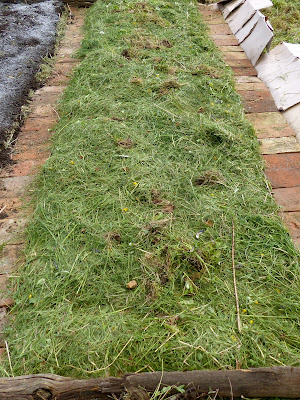 Pile on a good layer of compost and a few handfuls of horse manure... 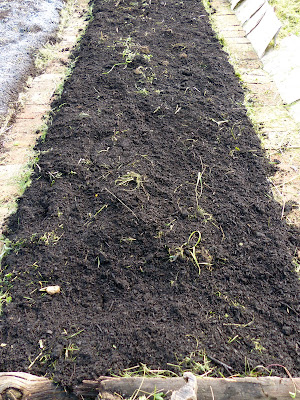 and finish with an icing of sieved wood ash from the fireplace. 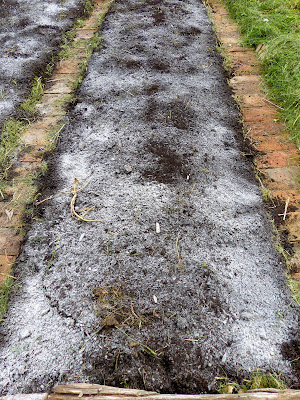 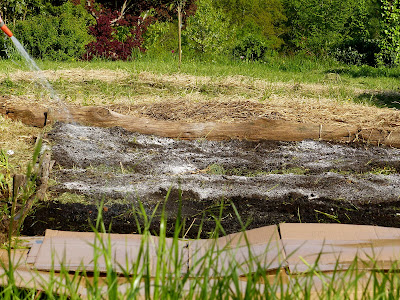 and protect with with a thick layer of straw and get going on the next! 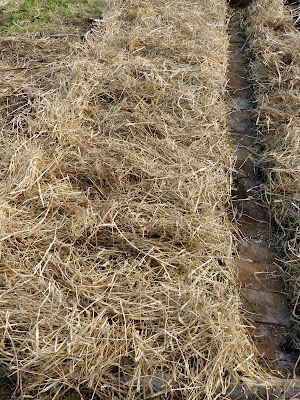 By my own calculations - depending on the greenhouse, the cardboard-eating worms and luck, I should have cleared beds soon and be ready for summer... 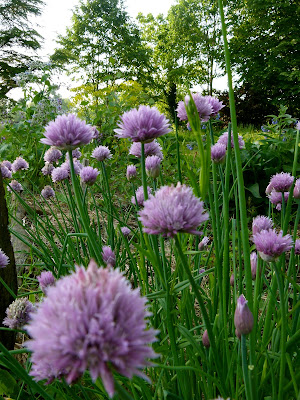 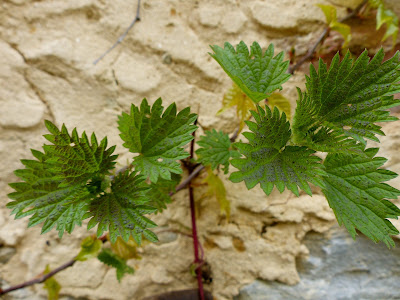 As the rain beats down soaking the soil beyond recognition,  there is little to do but hang out in the greenhouse watching aubergines try to germinate, repair the damage from terrorist night mice and watch wasps battle for their queen. In the garden, peas are flowering almost against their will, fava beans sprouts are looking doubtfully at the grey sky and baby radishes are barely holding on to their roots in such a deluge but nettles are loving it. They are growing everywhere in masses, offering us a delicious, nutritious vitamin C/iron packed alternative to the the last faded winter carrots and hollow turnips on the market stands. 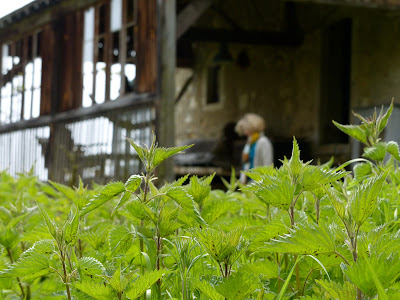 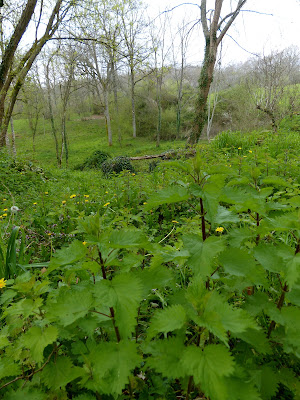 Although I love nettle as they are appreciated by butterflies and bees alike and are a fertilising treat for my tomato plants all through the growing season, one sting and my whole body zings for days as if I was bitten by a powerful cobra. To harvest an evening meal, I need to be armed with a thick pair of gardening gloves, long sleeves, trousers with heavy wool socks and a scissors and even then they find a  way to pierce through the tiniest tear or gap.
Once in the kitchen they still need to be handled with kid gloves until blanched in boiling water to erase the sting. I still fear a fresh leaf has escaped the scalding water and is going to zing me to death on my first mouthful.
I`ve been told that if you hold your breath while picking them, you feel none of the sting but thats all crap (at least in my special case). Jean Francois can be breathing out or in and pick them with his bare hands without feeling a thing but he does have special lizard like skin that must protect him. 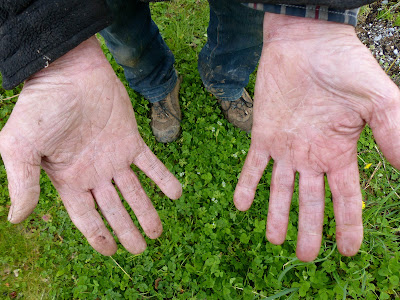 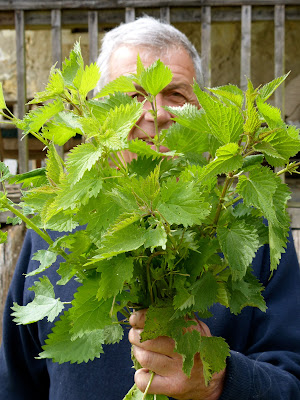 I still know that a few hours later he always acts a little woozy so the nettle sting must just have a delayed effect on him. I also have a strange neighbour who whips himself every morning with fresh nettle plants to counter his rheumatic problems!
Right now I'm making nettle pesto to spread it on my breakfast toast and its almost better than the summer basil pesto I dream of... 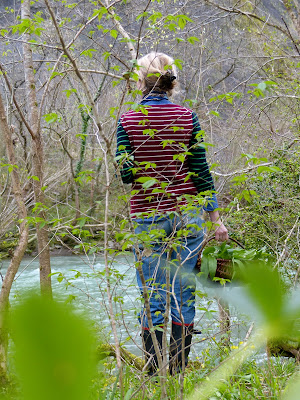 Scatter the breadcrumbs on  a baking tray and toast in an oven set to 180 degrees until golden and dry.
With your gloves on, wash the nettle heads well. Blanche in boiling water for  a mere minute and drain through a sieve over a bowl (to save the precious green water to drink) before plunging them in a bowl of cold water. Remove and dry in a salad spinner.
Put the nettles, breadcrumbs, garlic and cheese in a food processor and spin while trickling in the olive oil until you have a bright, runny paste.
Transfer to a bowl and season with salt and pepper. Thinly slice the tomatoes into ribbons and incorporate into the pesto. 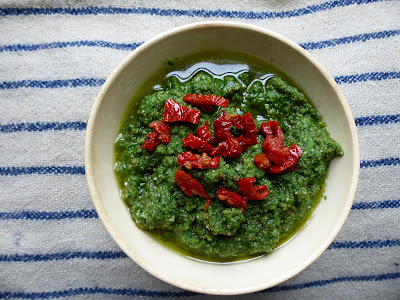