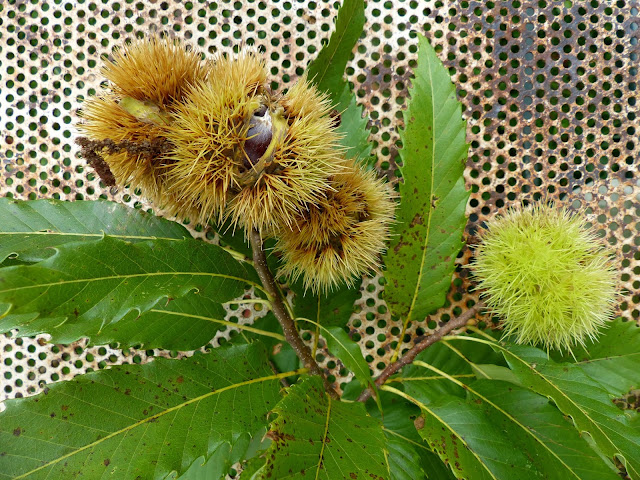 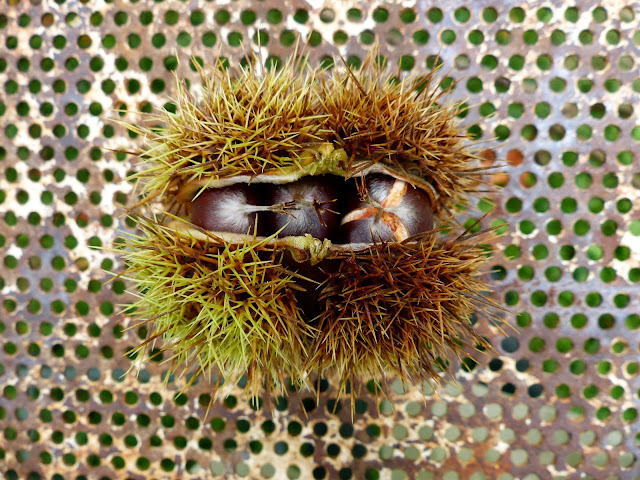 An exceptional year for chestnuts as the forest floor is littered with their bigger than average fruits. As the leaves fall so do the nuts and they need to be harvested almost immediately, at least before the squirrels relieve us of such a marvellous burden.
The native Castanea Sativa grows almost everywhere within the forest producing its sweet and dainty nuts while a few japanese immigrants of Castanea Crenata brought into the area by two intrepid basque monks, grow their larger and flourier fruit further to the east.
You need a good pair or gloves to sort the chestnuts from their leafy blanket, a good rub of a boot to split an unopened hedgehog-like husk and again the gloves to extract that precious nut inside.
Once in the basket, they have to be dealt with as soon as possible as their water level is super-high making them perish quickly. 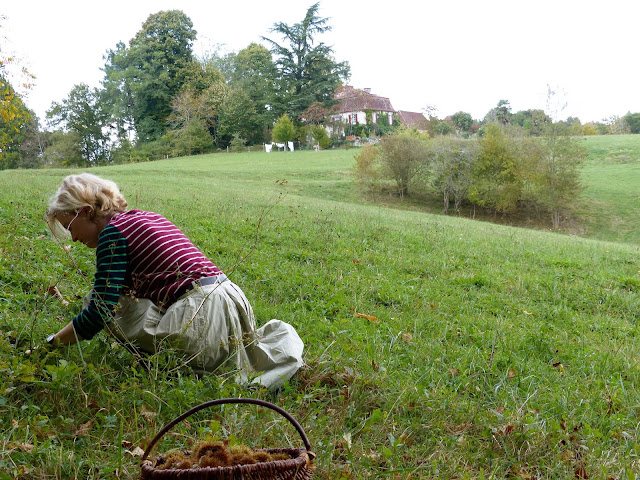 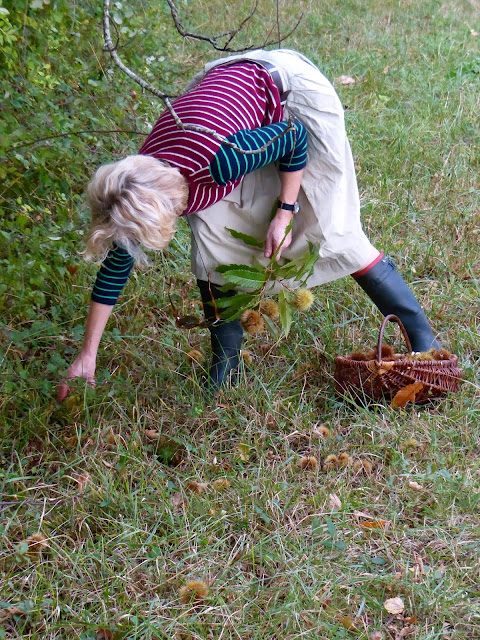 As I have a husband who loves eating chestnuts more than anything else in the natural world, his enthusiasm has no bounds. He can spend endless hours making himself adorable by knicking or cutting that sacred cross through the outer skin, boiling or roasting them for a couple of minutes before burning any traces of print from his fingertips, peeling them. 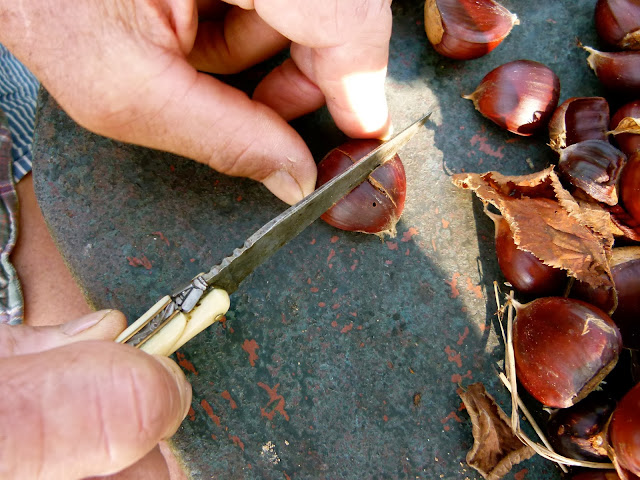 His cousins have come visiting from Aubrac where forests of chestnuts thrive and I've watched in envy as they peel chestnuts faster than carrots.
There as here, where chestnuts are so bountiful and were once such a core part of local life, a common insult for the poor is "un castanier" or chestnut eater. Its always the way with food that is plentiful. Nobody was ever insulted for eating other precious harvests like a fine porcini or morel mushroom.
I myself grew up with only its distant relative, the horse chestnut which has little to commend itself except as a most damaging weapon called the "conker" for pre-pubic boys with shifting testosterone levels. 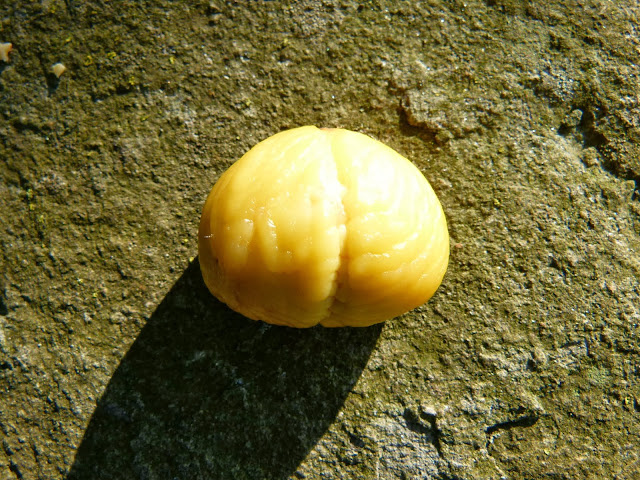 In comparison the real chestnut is so versatile whether savoury or sweet making some of the best soups, stuffings, game stews and the more decadent cakes and marron glacé and in Mailhos, what would be do without its honey....

Chestnut and Chorizo Gnocchi
for 4

Cook the potatoes in a large pan of boiling, salted water. Drain and peel when warm. Put the potatoes through a mouli or mash with a potato masher. Fold in the egg yolk, flour and semolina and season to taste. Work together with your hands to obtain a dough. Divide into 5 pieces and roll out each piece to the diameter of your finger and cut into lengths of 2cm. Indent each piece with the back of a fork so they will pick up the sauce better.

Meanwhile fry the sage leaves in olive oil and drain on some kitchen paper. Cook the gnocchi in batches in a generous amount of boiling, salted water. Serve with the sauce and parmesan and sage leaves. 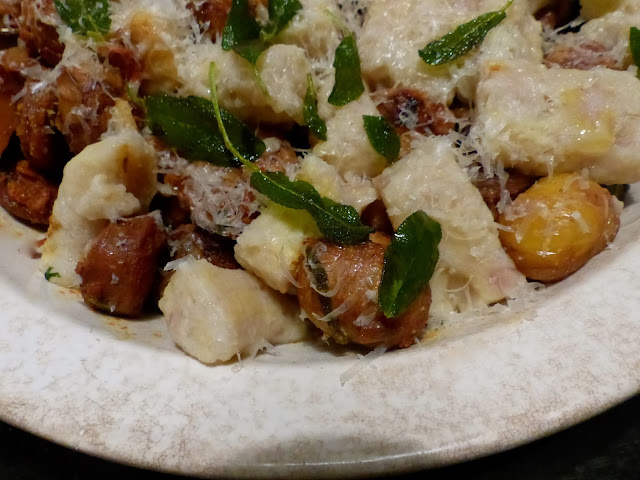 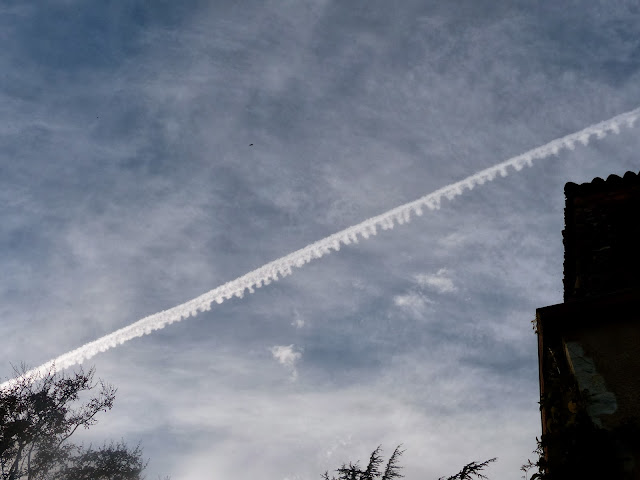 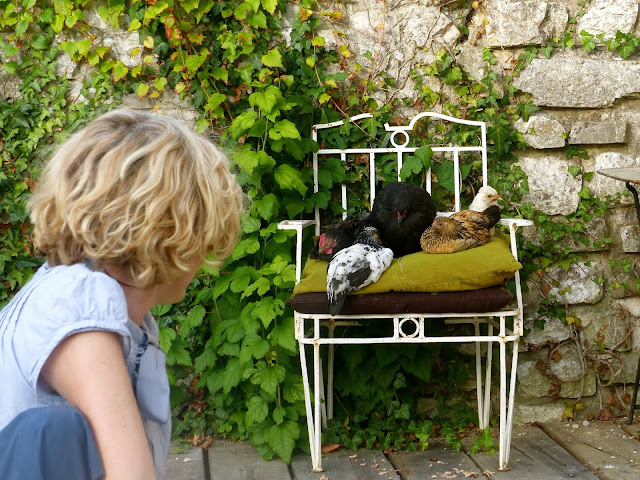 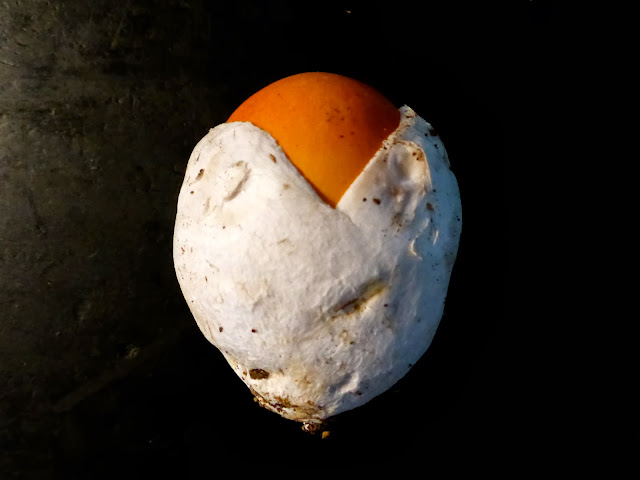 An unusually intense sun mixed with a warm September rainfall has ensured us a plentiful supply of mushrooms this autumn and Ovoli, Oronge or Amanita Caesarea has to be the best mushroom in existence.
As the latin name might suggest, Julius Caesar loved them but didn't die from eating them but he just might have if he got one mixed up with a hallucinogenic fly agaric or the putrid devil's bolete which can resemble it when young.
Every year at the same period in Autumn, we are so happy to find maybe one or two  growing under the same oak tree in the same part of our forest but this year our private crop has been bountiful beyond expectations. 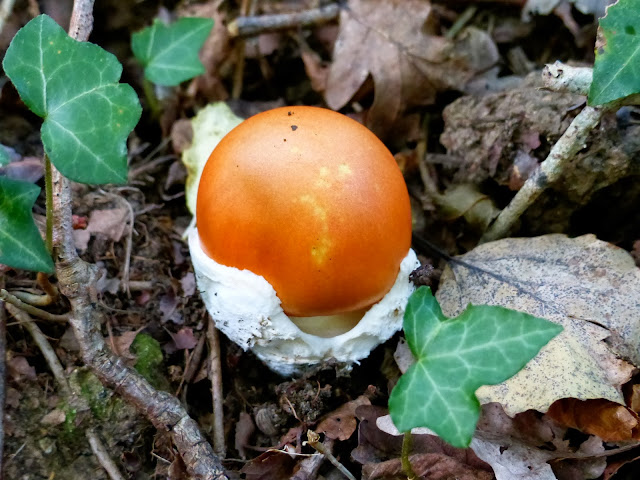 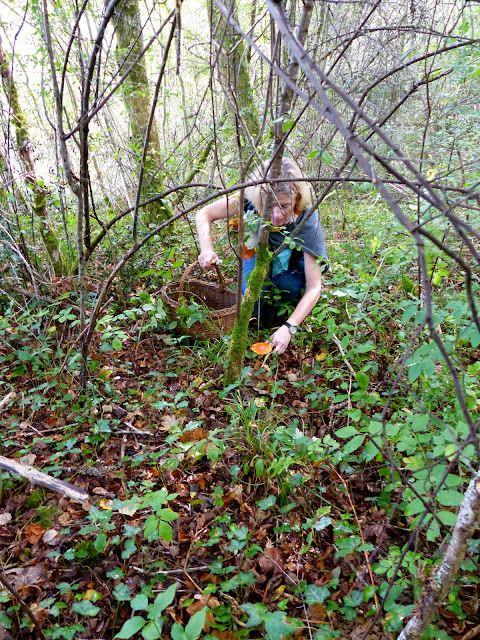 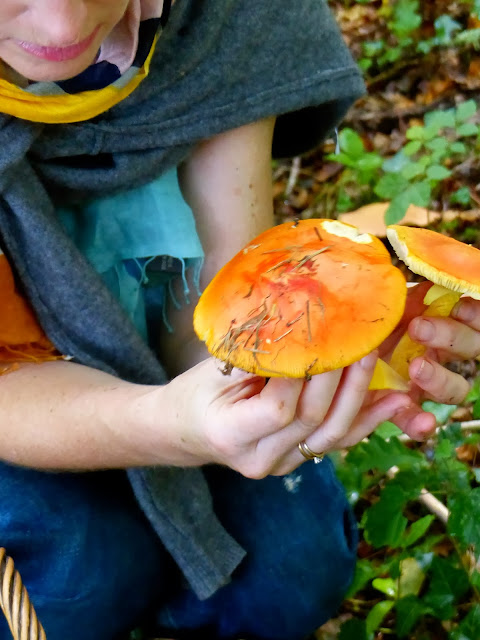 First we found their closed white and fluffy coat peeping from the ground, which needed to be covered by heaps of dead leaves to hide it from the "kickers" (mushroom hunters who trample or destroy every mushroom that is not a perfect porcini) before returning the following day to discover the perfect orange-capped ovoli, the size of a chicken's egg peaking through its fluffy protection.  Its really only worth picking at this stage as the mushroom within hasn't even formed properly in the first 24 hours and it's best just then for serving raw when the texture is firm. Leave it another day or two and it blooms into a marvellous, safron-coloured cap with feathered lemon-yellow gills but by then its fragile and has lost a lot of flavour but does well sauteed with heaps of garlic and chopped parsley. 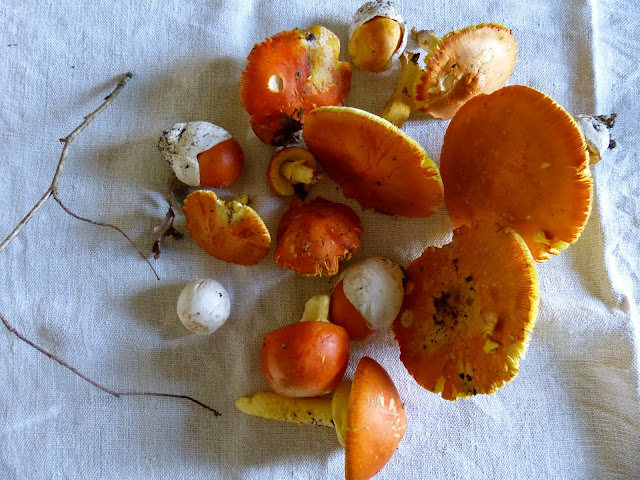 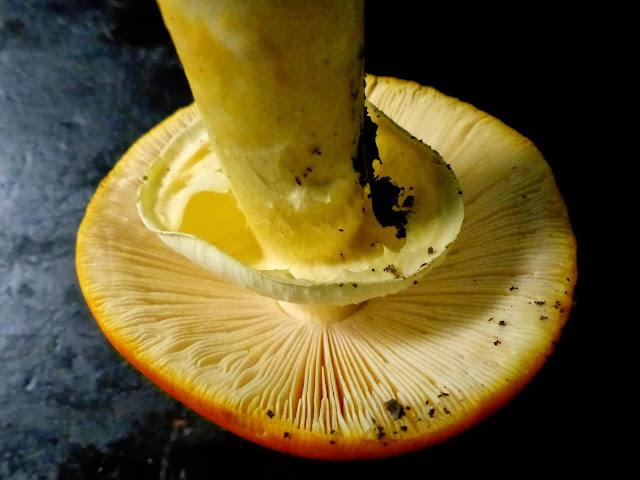 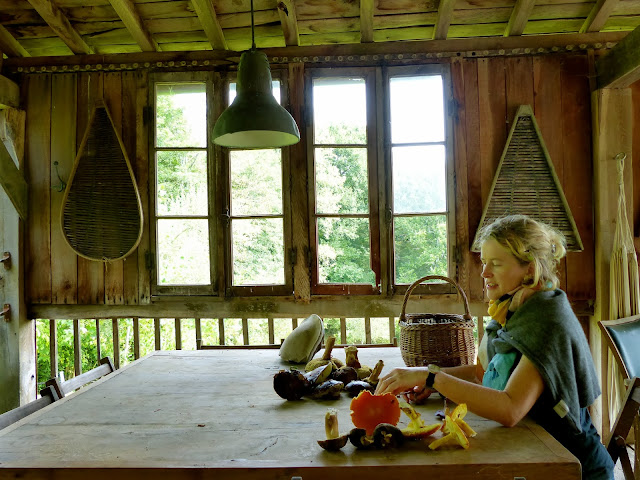 With so much to harvest within the confines of Mailhos throughout the summer and autumn, we forget the existence of meat. I haven't eaten beef for probably six months as it's so hard to find decent grass fed herbivores.
The local blonde d'aquitaine was invented in the early 60's by some nuts in a laboratory to eat little but the local hybrid corn that pollutes the marvellous local valleys. Those scientists took a garonnais, a quercy and a blonde des pyrenees and mixed them all together, twiddling a few genes along the way to produce the perfect consumer of high protein maize. Of course, the meat of this poor creature looks attractive and marbled but has little taste and is lacking in omega 3 which is found of course in a healthy grass. Stupid as I am, I still believe that cows should eat grass and grass alone and a blonde d'aquitaine can only be unhappy and unhealthy living on such a starchy and protein-based diet.
Locally, town fairs and tourist brochures celebrate that poor Blonde as the cow of the Bearn but the true holder of the title is the Bearnaise, whose image adorned their money and insignia and flags for centuries and the powerful seed companies and farmers unions have successfully wiped from the collective memory. 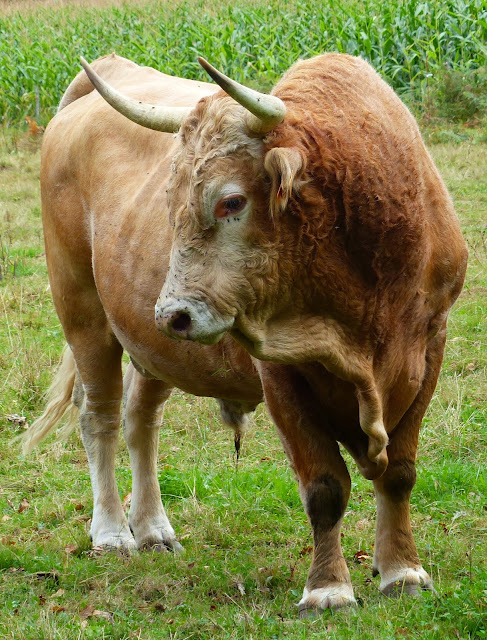 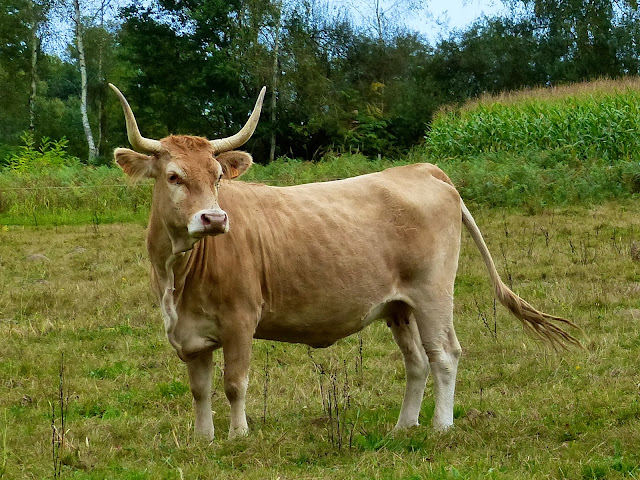 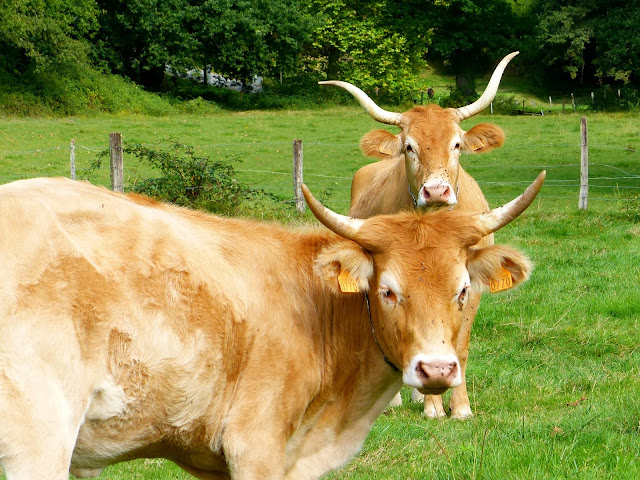 This Bearnaise with its elegant wheat-coloured coat, lyre shaped horns and strong and agile body is handsome, hardy, intelligent, an excellent mother and its meat is reputed for its finesse. Unfortunately there are fewer than 300 animals left locally. We have so far, visited over ten different farmers in the hills of the Pyrenees south from here and  hopefully by next year we will have a couple of pregnant ladies feeding from our 10 hectares of grassland.
I have absolutely no intention of tasting their meat and will continue to collect ovoli and porcini from the forest and fruit and vegetables from the garden but we will just try to make sure that this magnificent animal will not be forgotten and perhaps, one day, we can help re-populate the fertile fields of the Gave d'Oloron with lovely Bearnaise instead of corn. 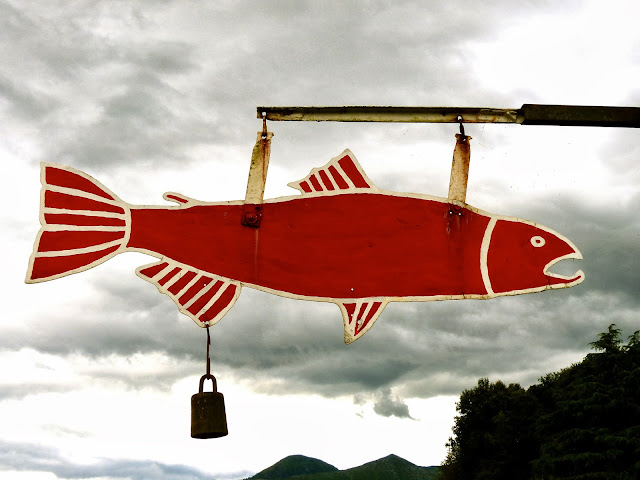 Raw Ovoli Salad
(for 4 as a starter)

Peel the mushrooms of their white coat and wipe the caps with a damp cloth.
Cut away the bulbous lower stem.
Using a sharp mandoline or knife, slice the mushrooms very finely through the caps and stems. Lay the slices on a plate and scatter over the parmesan shavings, the salt and freshly ground pepper. Drizle with olive oil and serve. 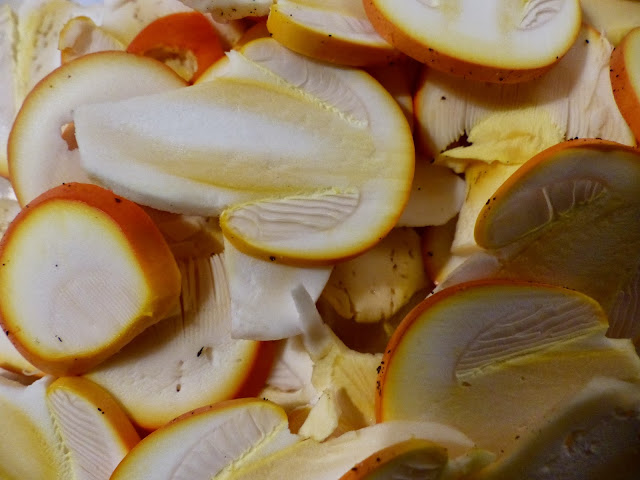