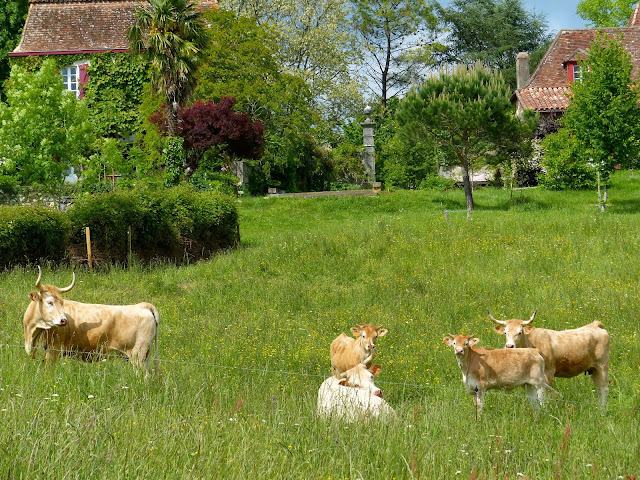 Our new girls arrived a few weeks back and since then have become a natural sight in our flower-rich meadows.
It's as if something important was missing in Mailhos and that was our new Bearnaise family of cows. We both spend time with them each day, talking and stroking their foreheads and have figured out that;
1 - cows are smart
2 - cows smell warm and sweet like homemade shortcrust pastry
3 - cows are affectionate and almost cuddly
4 - cows fertilise your fields for free
5 - cows will scare hunters as they look spooky to some 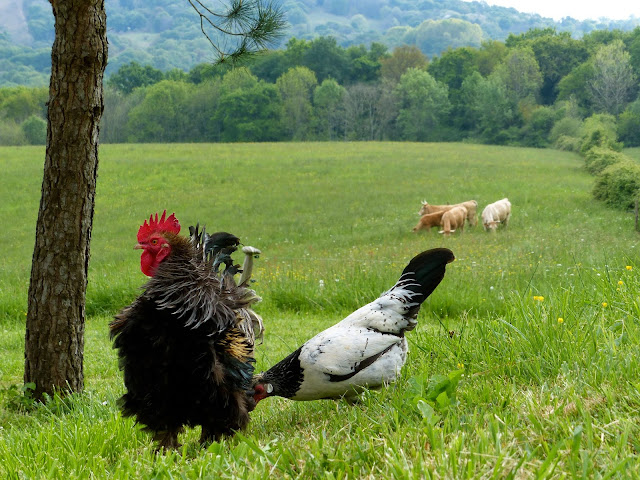 Unlike the local Blonde d'Aquitaine cow who was mixed together in a laboratory by some white-coated men from three fine, ancient breeds to make the perfect corn-consuming fillet steak, the Bearnaise, who existed for centuries in the Pyrenean valleys of the Bearn, is appreciated as an excellent milker and mother while the bulls usefully ploughed the fields. It is not for nothing that she is the medieval emblem of the Bearnaise though most locals wouldn`t even recognise her. She weighs less than the Blonde, is far prettier and has slim back legs that do not remind you of a rib of beef. 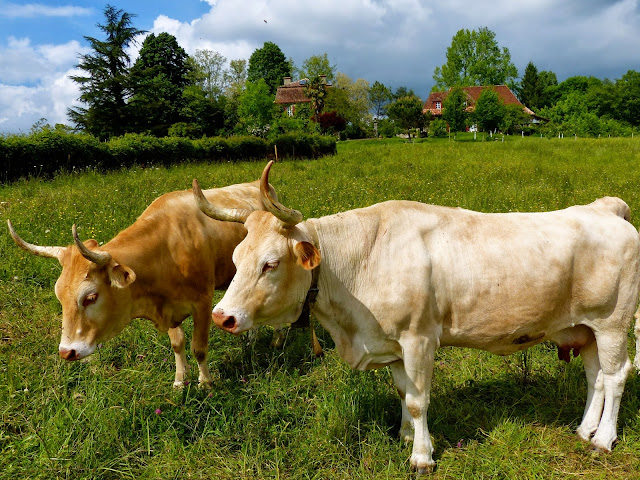 The race had almost disappeared but thanks to the perseverance and hard work of some great farmers, the Bearnaise has been saved and in 2013, we had over 200 beasts roaming our hills.
Maidelena is our grumpy grandmother and the chief. She is paler than the others with the typical high tail of her breed and a slightly damaged horn from bullying some other cow around. She is joined by her two soft and sweet daughters, Atarabi and Amalur, who dote on their mother, stand aside to give her the tastiest clover and even let her feed from their udders. 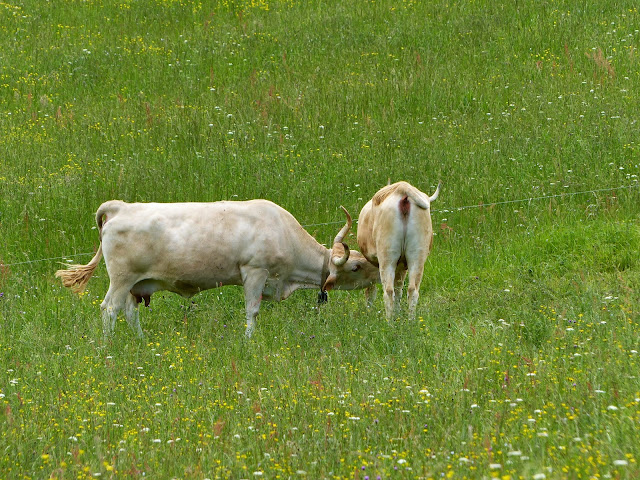 Both are more typically wheat-coloured and have the most splendid lyre-shaped horns. 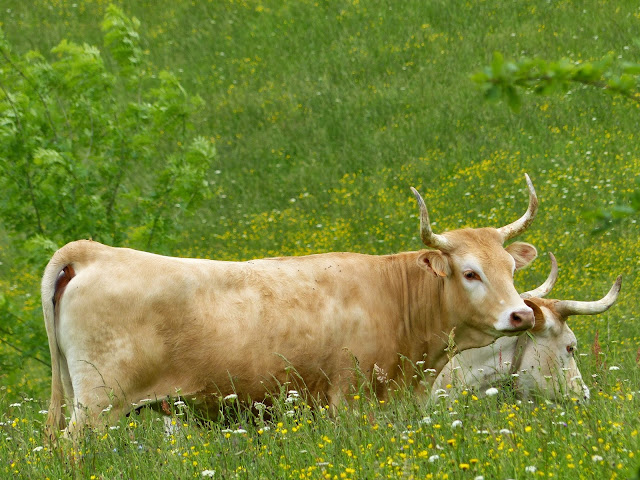 Ahatxe is Amalurs calf and is now 8 months old and overtly curious. She was still suckling her mother until the arrival of Ihizi last week 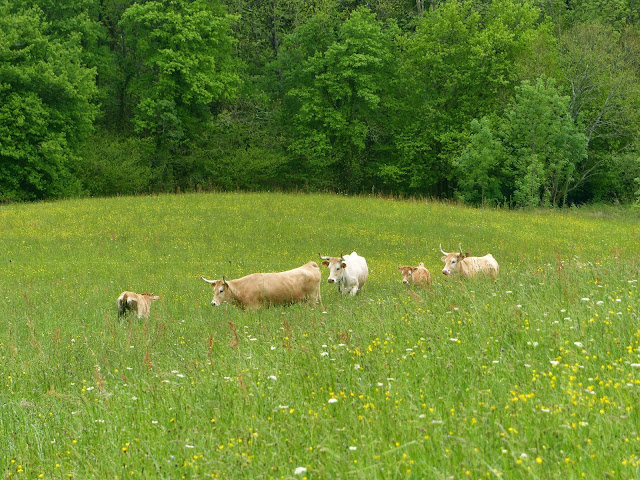 and they have now struck out together to investigate the dark forest, nibble young shoots and bend or break the odd, young oak tree in two. 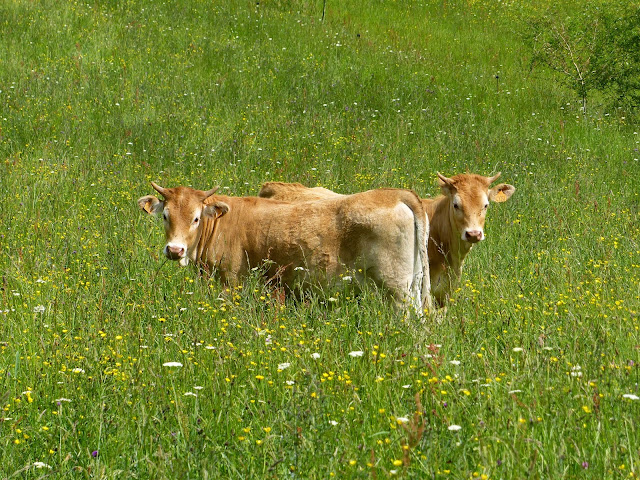 None of our ladies will be served as a plate of beef. They will be milked for cream and cheese, when the time is right. They will have babies and those babies will begin new families in other farms until the Blonde d`Aquitaine is extinct and then they will live into retirement in perfect peace. 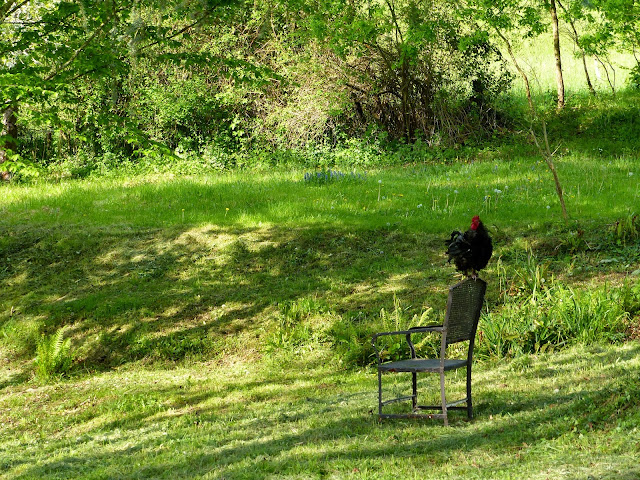 Meanwhile the greenhouse is boiling over with healthy plants but nights are still not clement enough to risk their fragile stems and leaves. I'm holding out as long as I can or as long as the greenhouse provides space. 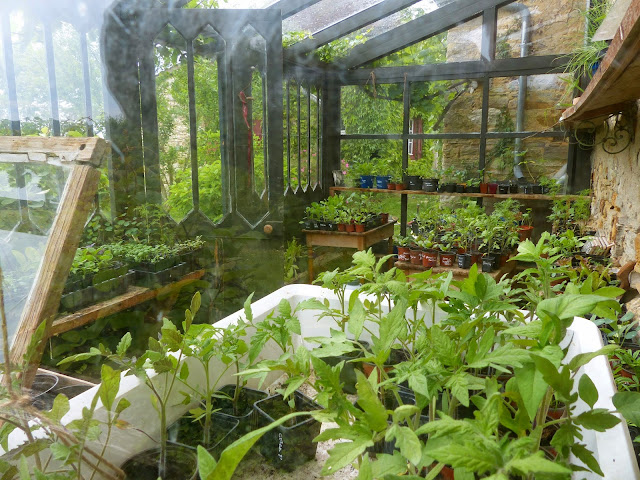 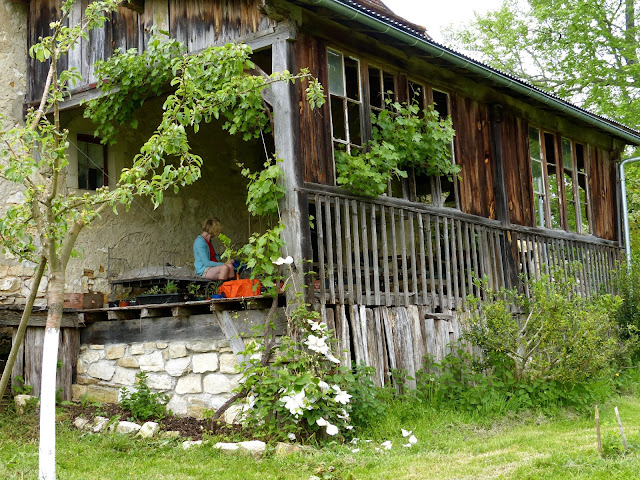 12kg Lulu has also arrived on long-term holidays from her bourgeois appartement life in Paris and has a specific job of trapping vermin and being cat-like and cuddly on the sofa. He is learning fast and after a week of torturing too many innocent lizards has understood that mice are more of a challenge and perhaps tastier.... 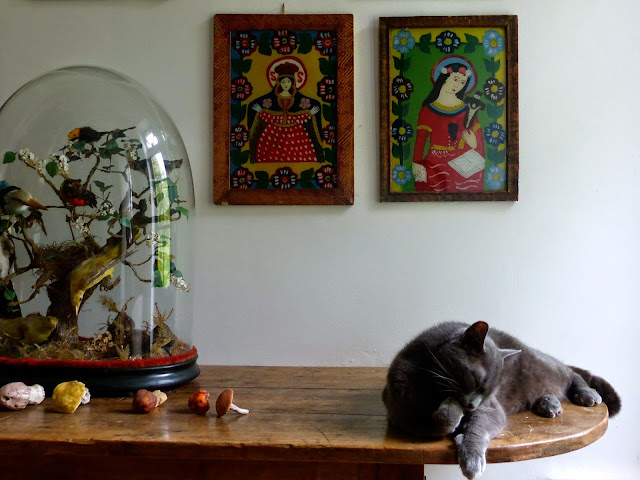 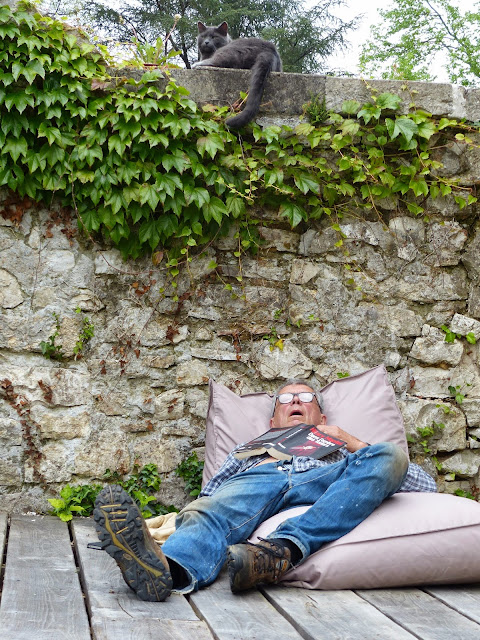