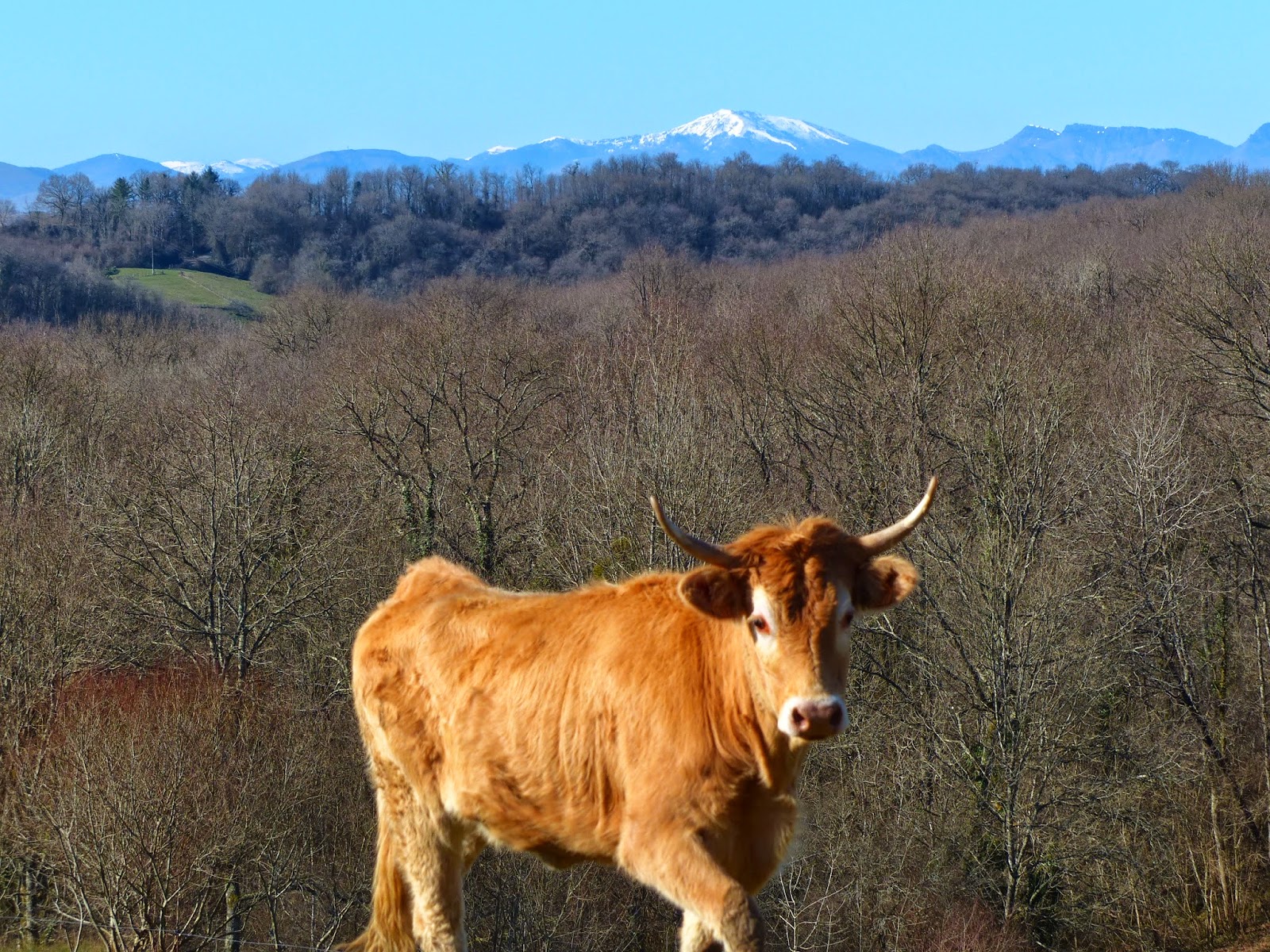 The sun is struggling through the thick mass of cloud above and promising Spring - at last. Growth is late this year after a wickedly, wet February that left our fields looking more like the Great Lakes than rolling pastures. Yellow Mimosa is flowering a month late while willow, the bees first pollen treat of the new year, is just appearing. It will take a little more than a few warm days to get the grass growing in the fields as it growth demands daily hours of light rather than heat and light hours in the day are still scarce. Our young bearnaise cows, after surviving a relatively long and miserable winter outside are looking chubby and healthy with gorgeous coats of thick hair that they are not ready to lose just yet. Before leaving for our winter break, we were convinced that like any other domestic animals they would need protection from the climatic perils of winter but convinced of their rusticity by a mountain-farmer friend and with the help of good neighbours and friends who fed them their generous daily ration of hay, they have proved their toughness.
Later this week, Martin, our carpenter friend, will start the redecoration of the old wine storehouse so we can entice them inside from time to time which will be necessary if they are going to to have babies this year. They have not being inside since their arrival in Mailhos last year so they will need some delicious titbits to attract them inside. 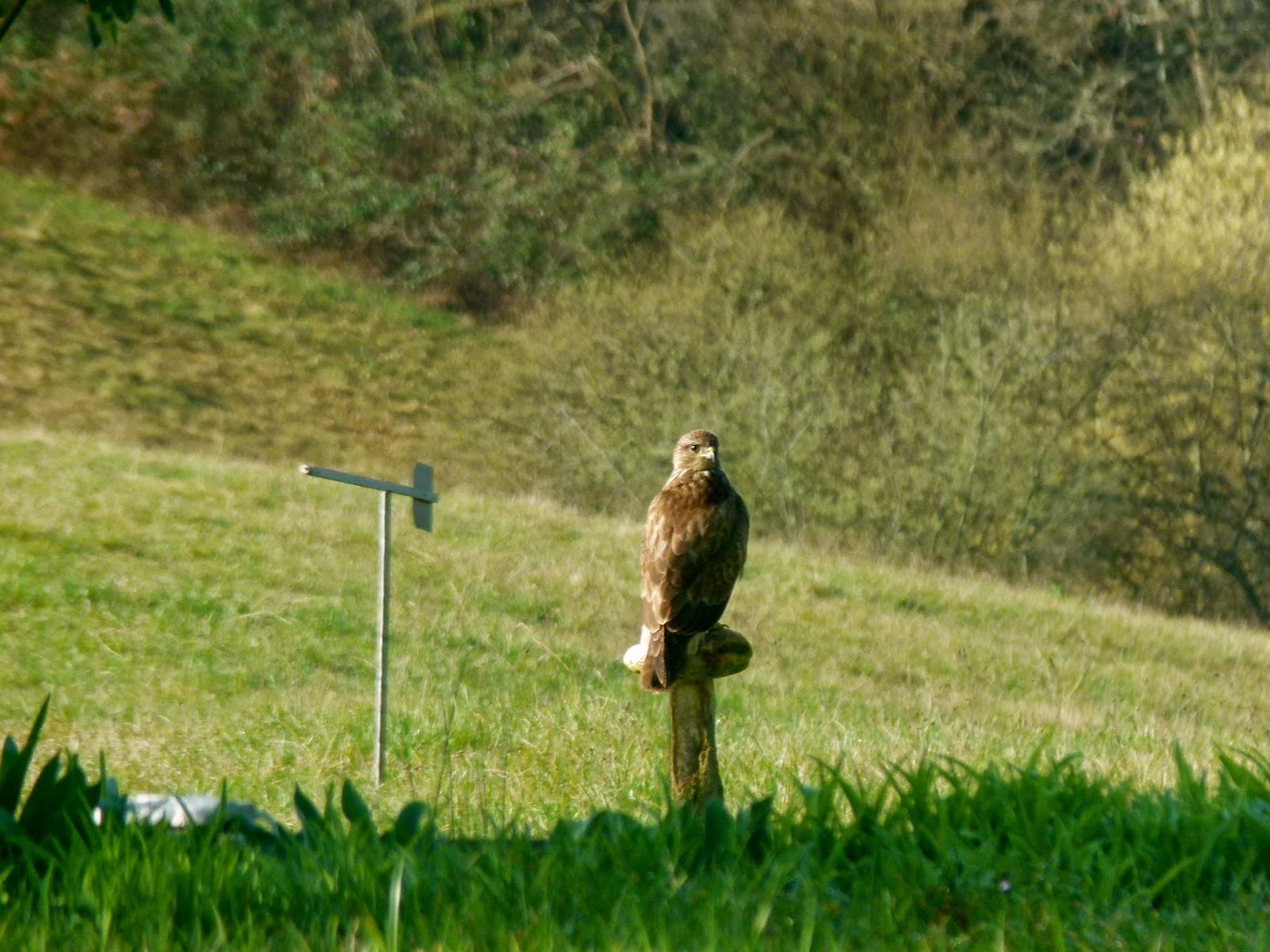 Our pair of hen harriers are busy circling the open country for voles, mice and unfortunately chickens. The rooks are none to happy and are mobbing the male in a daily scramble, fearful that he will stalk out their already laid eggs. It seems almost cruel at first but Mr hen harrier is only biding his time and will eventually grab one of his persistant tormentors and down them to their death and that will be the end of his harassement. 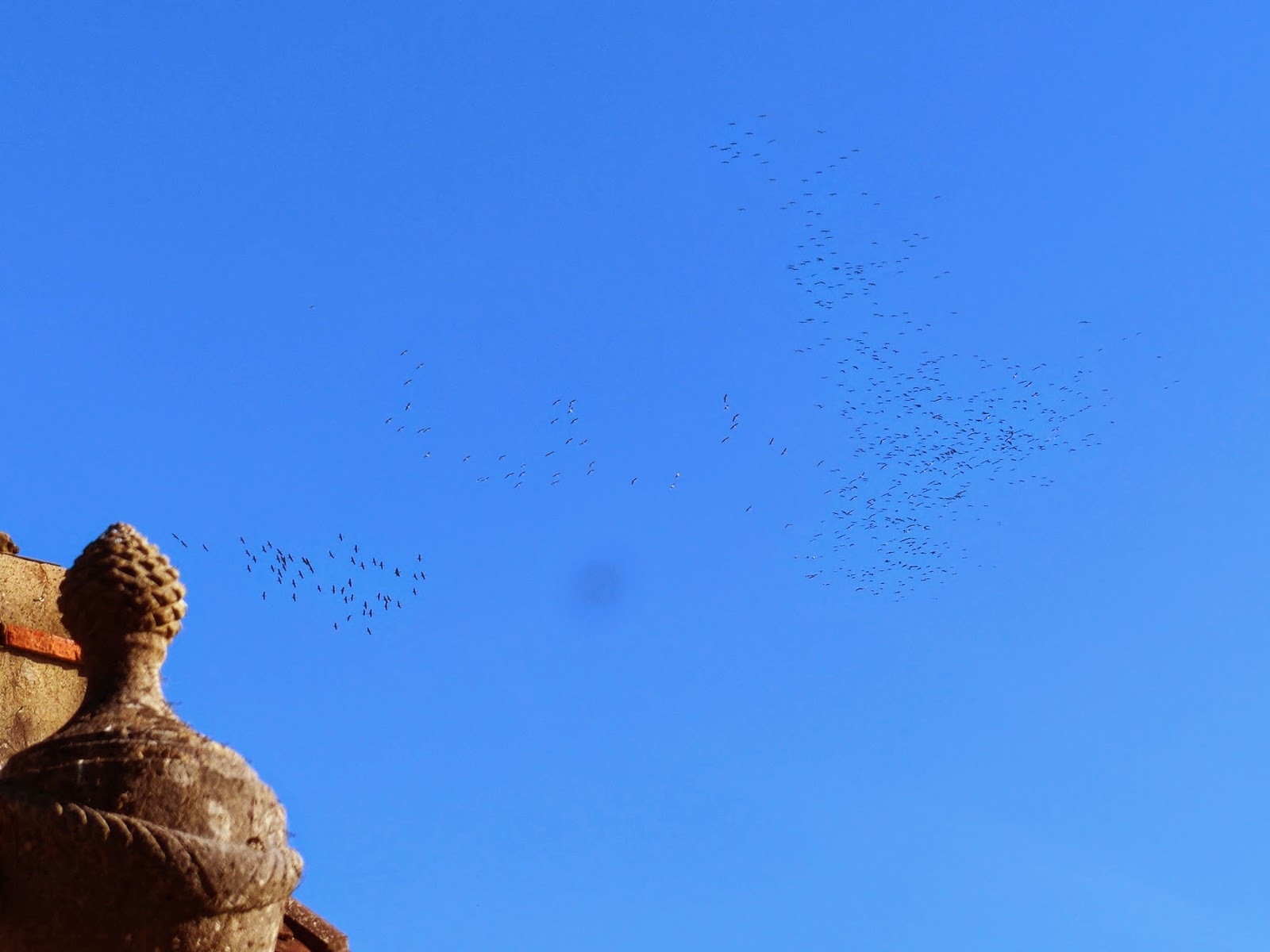 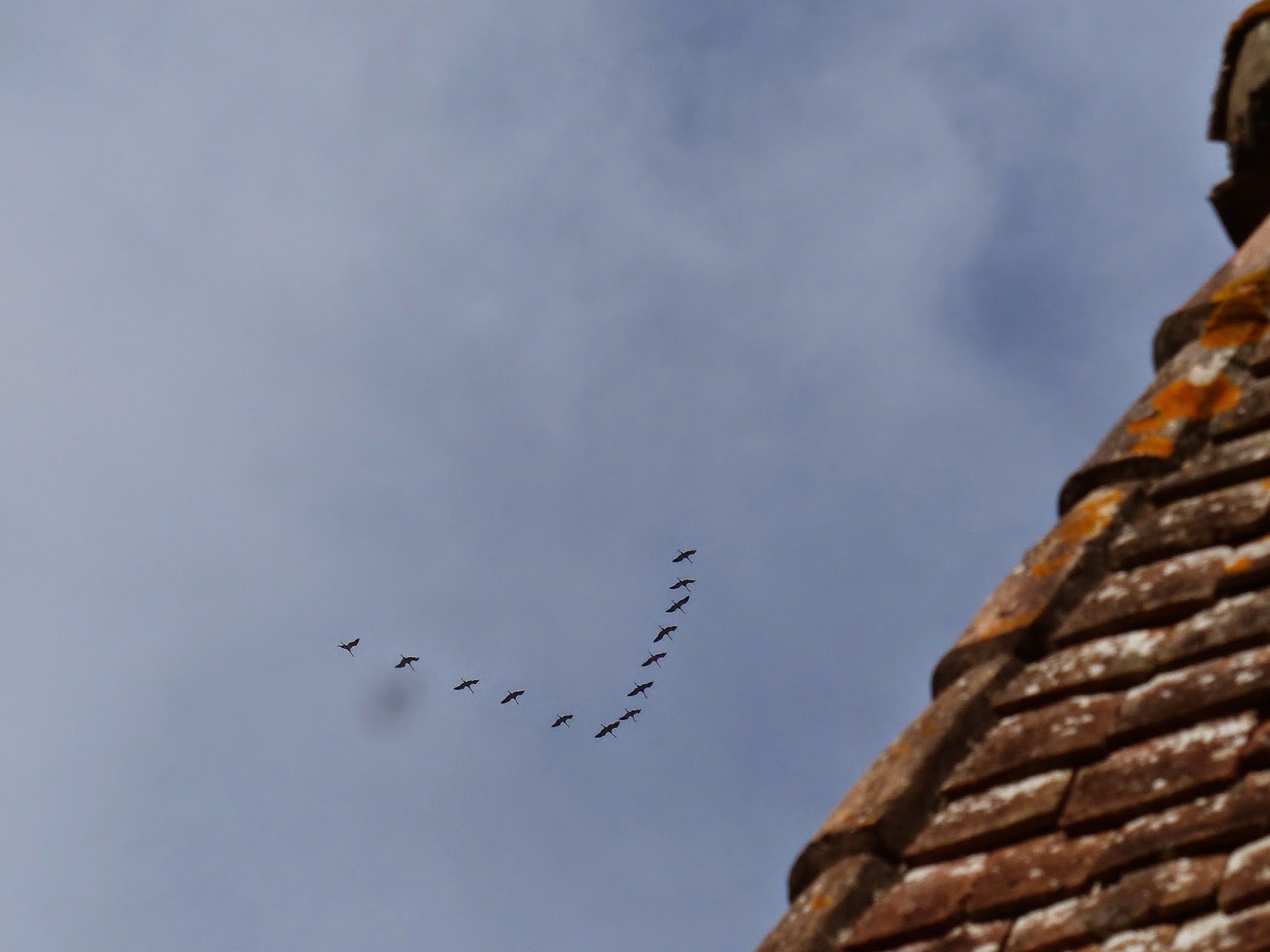 On a happier note, the cranes began their return from the African north hoping to reach their summer breeding grounds up north before April. The first flight north on the 19th February, probably the only day when the rains abated was the best as we knew then that Spring was not too far ahead. Lifted by the thermals, they climb as high as 2000 meters, extending their wings  and assume a "V" formation gliding northward propelled by gravity and wind. Their voices can be heard in the distance even before we manage to spot them arriving from the pyrenees, calling to each other and their crane chicks, who fly close by. They are known to cover 800km in a day but more than often we can wake at the crack of dawn to find the front field littered with camping cranes waiting for the perfect conditions to take off.
Oh its so good to be back.... 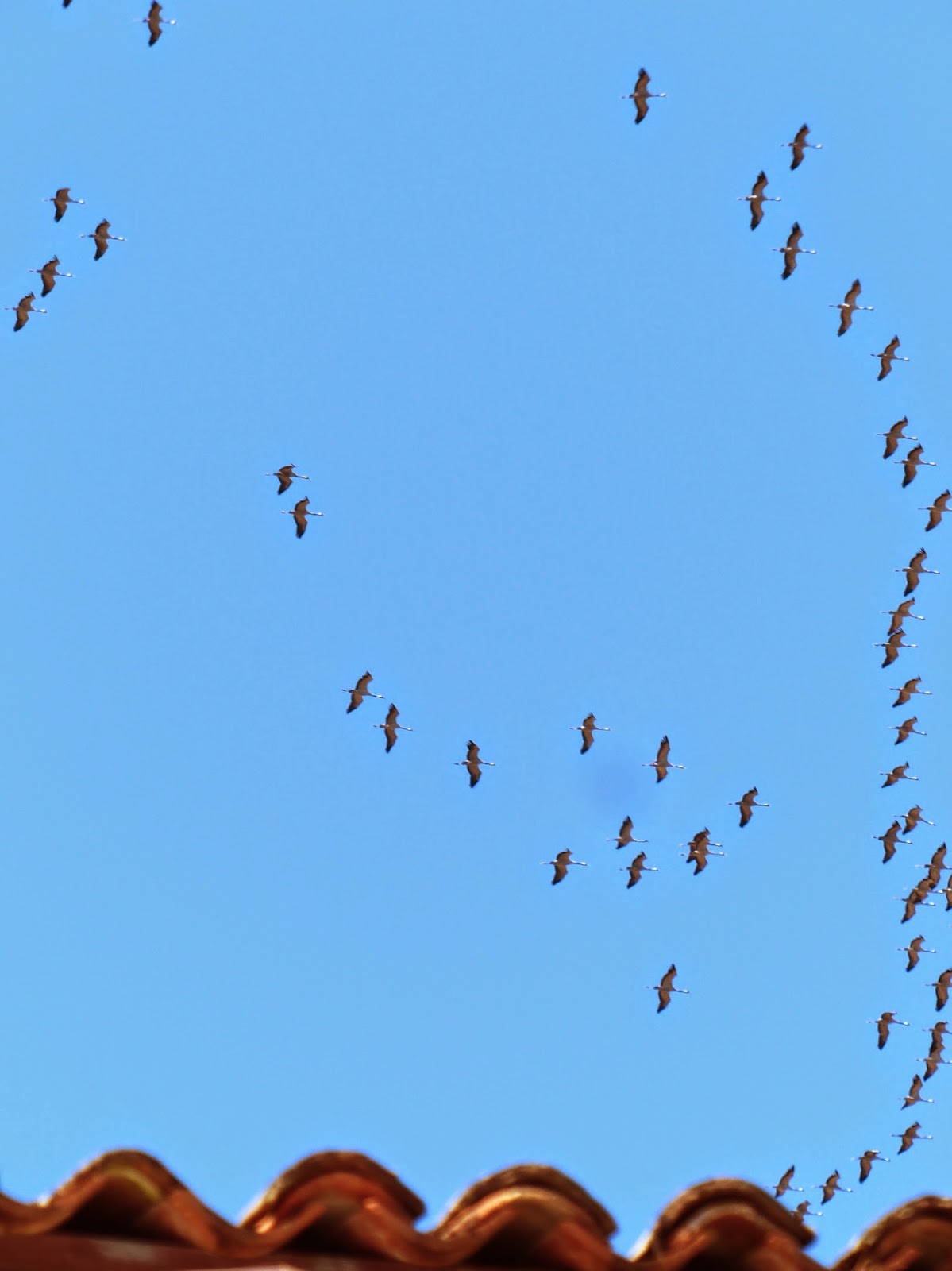