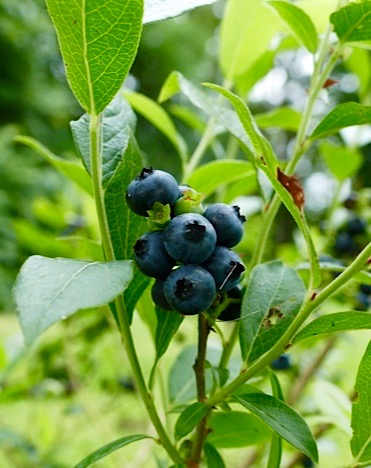 The sky is clear with barely an airplane trail in view. A warm winter, a cool spring and then a blast of hot summer have created the best conditions for berries. We have been inundated with loganberries and raspberries  and even had some blueberries which normally hate my limey soil and have refused consistently to make fruit despite being planted under a nice acid-bearing, cedar tree and carefully mulched with pine needles for oh so many years. Best of all berries have to the the raspberry but next in line is the dusky-blue blueberry which has managed to produce enough to fill two large bowls; enough to remind me of that enigmatic, tarty-sweet taste of wild, Irish bilberries.
All berries have a short window of perfection and of course, fruit at the same time so the freezer is packed solid. 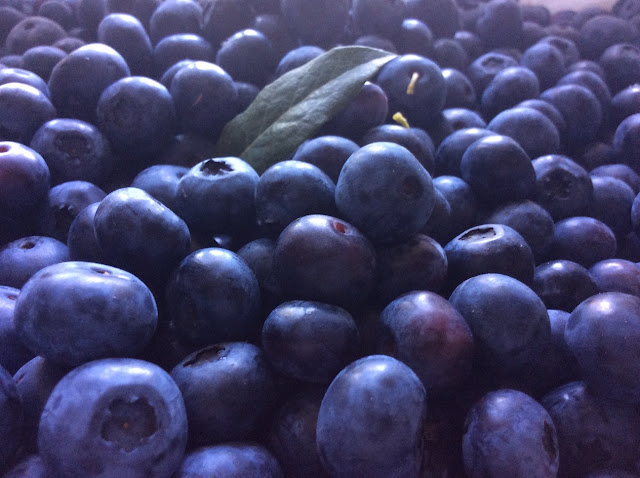 Its also the first year that the goji, blue honeysuckle, ragouminier and goumi, after a long wait, have flowered and fruited.
Most of these plants produce just enought for a raw-graze but both the goumi and ragouminier are not for the soft-palated. 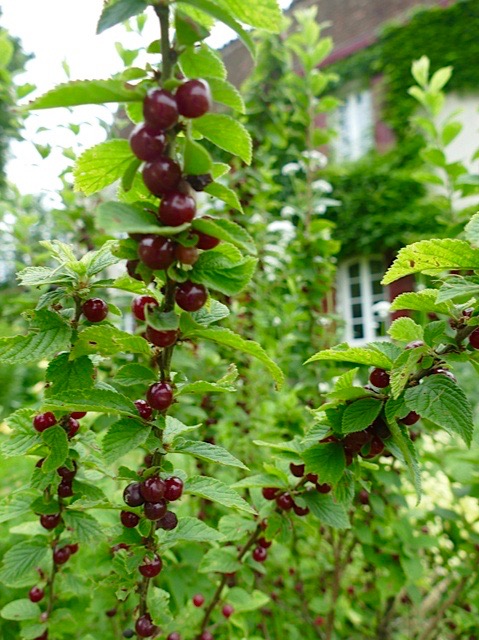 The ragouminier is very tarty but tastier than a red-currant but with a big, hard nt that needs to be removed in order to reduce expensive dental bills. I have to cook them gently until the pulp is soft enough to be pushed through a fine, mesh sieve and served with some sweet spices as a perfect sauce for a duck fillet. 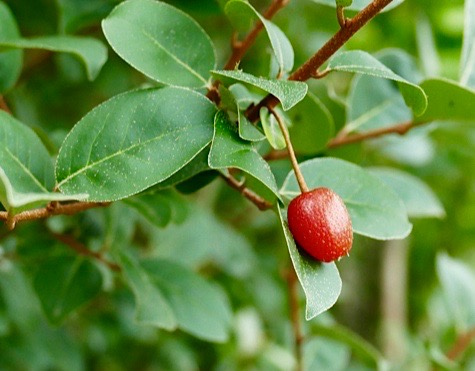 The goumi is another story. Higher in lycopane than the reddest tomato, a powerhouse of vitamins A and E, classed as a legume because it creates its own nitrogen but still possesses and unfortunate astringency that just might work with jam or a torturous medicine.
In order to feed an excessive need for blueberries, I`m obliged to order another 15 kilos through our local Epicerie Sans Fin so they`ll be enough for a few cakes or tarts but raw is almost always better.... 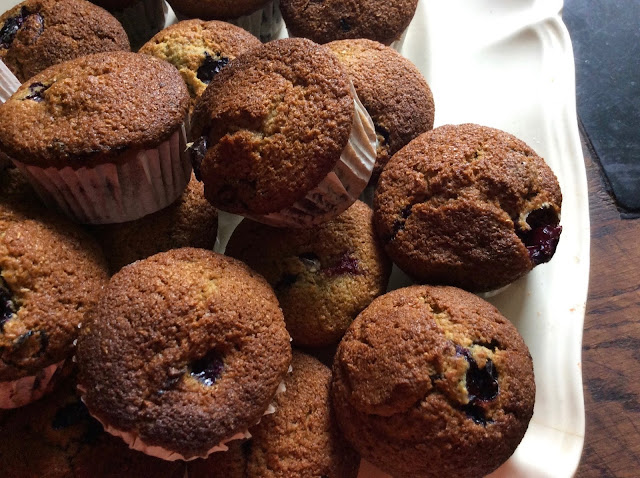 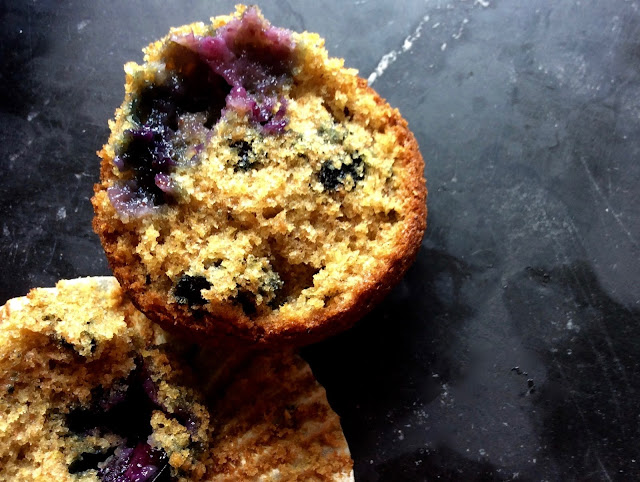 Preheat your oven to 200c/Gas 5.
Line your muffin tin with 15 papers.
Beat the butter until very soft and light. Beat in the sugar followed by the egg and combine well.
Crush half the blueberries with a fork and add to the butter mixture.
Sift the flour with the baking powder, salt and the bicarbonate of soda and mix well together.
Fold this mixture, little by little, into the butter mixture, alternating with a little buttermilk until finished. Stir in the rest of the blueberries without crushing them.
Spoon the mixture into the papers and bake for 25 minutes or until golden. Cool before serving but eat quickly, as they are at their best. 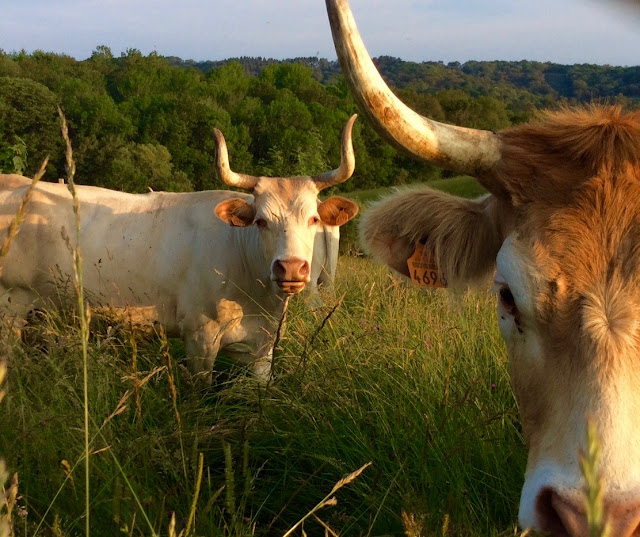 Cows are happy, although our dear granny cow, Urta, is suffering from the effects of a post-partum infection, an ovarian cyst and a possible kidney defect which I am trying to treat, one by one, once it was sure that antibiotics were almost ineffective. She is eating, drinking and acting a little bossier while gaining weight so our fingers are crossed for a full recovery. Three of the young bearnaises are due to give birth for their first time this autumn, so its important that the `wise one` is around and in full form to educate them in baby-rearing. 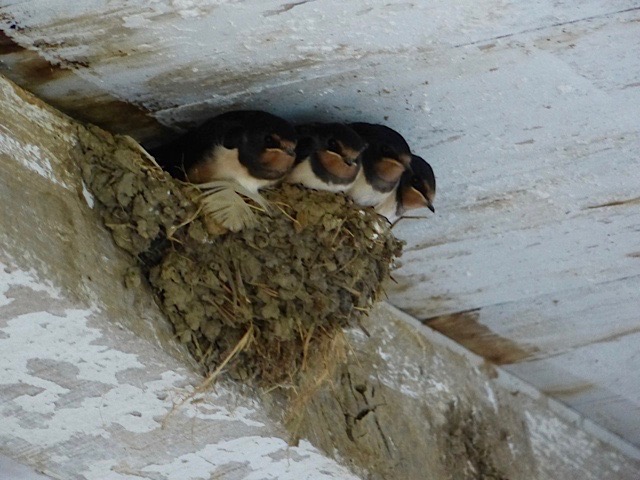 Chimney swallows established five nests in both barns in late march and are on their third set of fledglings that scan the fields for insects and skim the swimming pool to quench their thirst. In our ten years of Mailhos, I`ve never seen so many nesting birds. There are at least ten black redstart families nesting in the sauna and barns, robins galore, an architecturally  inept wren that needed by help to gather up her bald babies and reinforce a sagging home. 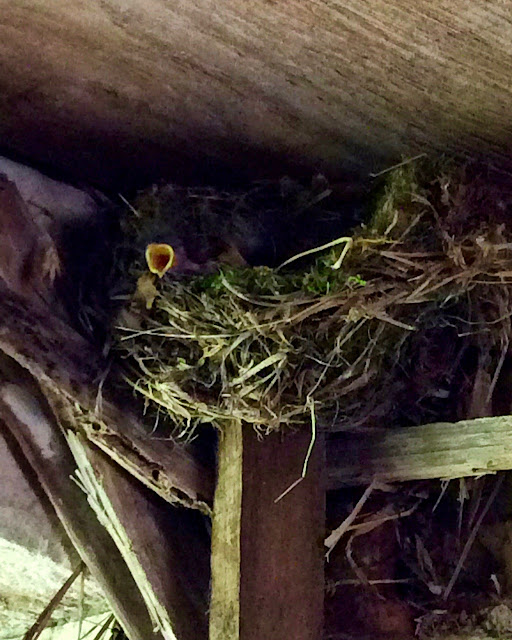 Thrushes are plentiful. A hen harrier couple have nested in the large prairie, while a goshawk was probably doing something similar as he came to feed on one of my chick.
And as for chickens, there is fresh blood in the family.... 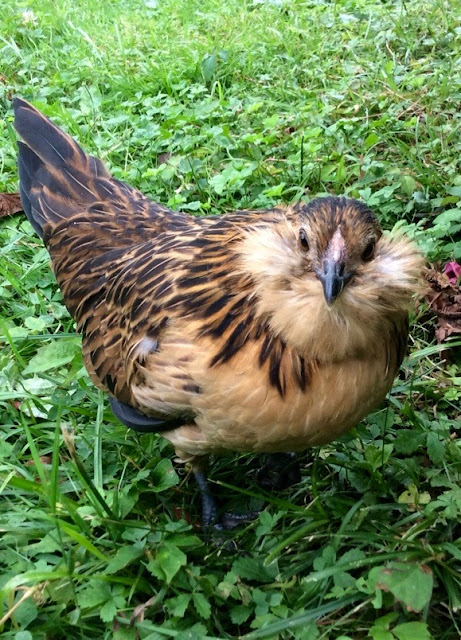 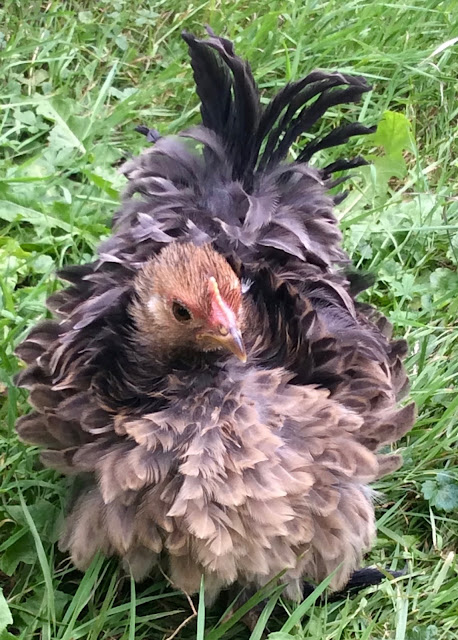 (and just for those who are plagued by mildew .... I found this incredible recipe in Terre Vivante that has worked wonders and is tastier than a copper spray.
Mix 6 drops of each of the following essential oils - wild thyme, savory, tea tree, clove, sweet orange with 10ml of rapeseed oil. Add 3ml of black soap or organic liquid soap. Mix with 1 litre of rainwater or normal water acidified with a little vinegar. Shake vigourously and serve.... It works marvellously)